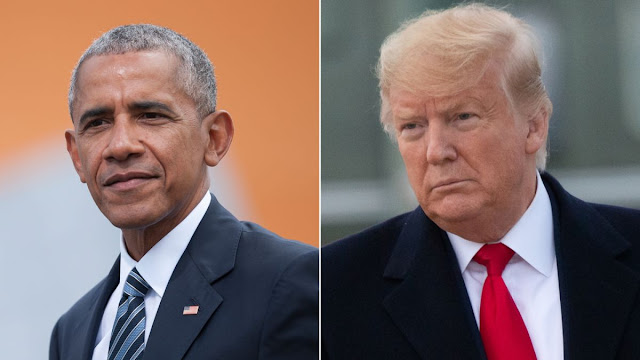 The Trump administration has sent Congress a list of dozens of Obama administration officials who they say asked for documents that led to the identity of former national security adviser Michael Flynn being "unmasked" from intelligence reports between the 2016 election and President Trump’s inauguration.

“I am providing a revised list of identities of any officials who submitted requests to the National Security Agency at any point between 8 November 2016 and 31 January 2017 to unmask the identity of former National Security Advisor, Lieutenant General Michael T. Flynn USA-Ret.),” states the document from Grenell. The list has been re-organized into chronological order.

It is not uncommon for officials to ask for the identities of anonymous individuals unnamed in intelligence reports, but the list is likely to become part of an escalating debate over whether Flynn's prosecution was handled appropriately by federal authorities.

President Trump also has frequently argued that Obama officials wanted to hurt him politically through selective leaks to the media. He and other officials have pointed to the unmasking of officials from intelligence reports as evidence of the attacks.

Democrats see the list sent by Grenell as further evidence of how the Trump administration has politicized the intelligence community and the Justice Department, which controversially moved last week to drop charges against Flynn for lying to investigators despite securing a guilty plea.

Andrew Bates, a spokesman for Biden's presidential campaign, responded to the former VP’s presence on the list by tweeting a story from May 2018 where Johnson indicated that Biden is the biggest threat to Trump’s reelection chances in November.

“There is nothing improper about asking to unmask the name of a US person in a classified intelligence report as long as the requester has authorization and a justified reason,” said Barbara McQuade, a law professor at the University of Michigan.

“If an unnamed US person were having suspicious communications with a foreign government, for example, then members of the intelligence community would have a duty to learn the person’s identity by requesting unmasking so that they could effectively assess the information,” McQuade added.

In fact, the list that was compiled by NSA Director Paul Nakasone said that: “Each individual was an authorized recipient of the original report and the unmasking was approved through NSA’s standard process, which includes a justification for the request.”

The memo also said that it could not confirm that these individuals had seen the contents of the reports.

In this case, Flynn was being scrutinized for conversations he had with then-Russian ambassador Sergey Kislyak about the Obama administration’s sanctions on Moscow. Flynn ended up pleading guilty in December 2017 to lying to federal agents about conversations he had with the Russian diplomat, but he has since sought to withdraw his plea, claiming that his case had been tainted by “the government’s bad faith, vindictiveness, and breach of the plea agreement.”

The release of the list of names comes as Trump and his GOP allies have argued that Flynn is a victim of prosecutorial misconduct after the Justice Department (DOJ) recently released field notes that showed FBI officials debating how to handle a January 2017 interview with the former lieutenant general. A short while later, the DOJ filed a motion to dismiss the case, in what has been seen by legal experts as an unusual move, particularly because Flynn had pleaded guilty twice.

It is now up to a federal judge to decide whether to grant this motion, seek additional information, or push forward with sentencing.

The FBI field notes have caused an uproar, leading some of Trump's allies to claim the Obama administration was seeking to entrap Flynn. They have pointed to how one bureau agent asked in a handwritten note whether it was their goal “to get him to lie, so we can prosecute him or get him fired.”

“The records are one step forward in an important effort to get to the bottom of what the Obama administration did during the Russia investigation and to Lt. General Flynn,” Johnson and Grassley said in a joint statement.

Sen. Rand Paul (R-Ky.) has also invited Grenell to appear before his subcommittee next week to testify on the declassified documents.

Paul said investigators need to find out “what did President Obama know and when did he know it,” and he also took a shot at Biden, underscoring how the issue is likely to play out on the presidential battlefield.

“This is Vice President Biden using the spying powers of the United States to go after a political opponent. He’s caught red-handed here,” Paul added. “That to me is alarming.”

But former federal prosecutors and legal experts have argued that the tactics used by the FBI in the Flynn were law enforcement 101 and that they were fairly applied in this case.

“The term ‘unmasked’ sounds vaguely sinister, but it's hard to make out anything criminal here,” said Elie Honig, a former federal prosecutor. “High-ranking officials learned, with proper approvals and through authorized processes, of Flynn's identity as a participant in calls that had been intercepted by intelligence agents who raised alarms.”

Flynn’s name ultimately was leaked to the press, though it isn’t known who shared that information.