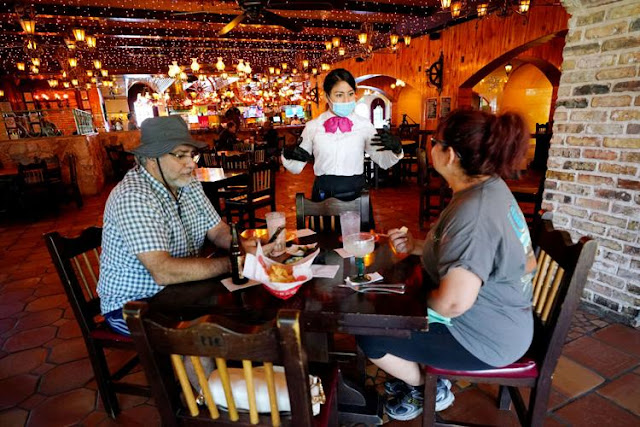 As Texas restaurants reopened to limited dine-in service Friday, industry leaders expressed optimism that it marks the first step in restarting a crucial sector of the state’s economy.

Working in collaboration with the office of Gov. Greg Abbott, hospitality groups have formulated the “Texas Restaurant Promise,” to inform the public of new safety protocols. Created with input from state and national health authorities, it’s posted at entrances so customers are aware of the measures the restaurant is taking, and so they also know what’s being asked of them, Kelsey Erickson Streufert, Vice President, Government Relations & Advocacy at the Texas Restaurant Association (TRA), told The Center Square.

“It’s been a thoughtful and gradual process to prepare for reopening,” Streufert said. "We continue to be impressed by our restaurants’ ability to adapt. We’re calling for a sustained recovery, based on the science and medical data. Restaurants in most counties are reopening at 25 percent capacity not including employees. It’s an important first step as we adjust to the new normal.”

It’s estimated nearly 700,000 restaurant workers lost their jobs during the mandated closures across the state. There are roughly 50,000 restaurants in Texas, and it’s possible up to 10 percent of those will never reopen, Streufert said.

“The impact has been devastating, it’s hard to capture how hard it has been for our industry,” she said. “Even in the best of times it runs on pretty small margins. This crisis is unique because it affects everyone, and it really was a sudden impact; in a matter of days restaurants had to close their dining rooms, which cuts into the large majority of revenue for businesses that already run on small margins.”

In the long term, it will take more than 25 percent dining occupancy for the economics to work, Streufert said, adding that patrons are encouraged to continue making takeout orders and whatever else is possible to support their local restaurants, many of which continue donating meals to food pantries and similar organizations.

During the closures, many restaurants were unable to secure Paycheck Protection Loans, and many have had Business Interruption claims denied by their insurers, despite being required to close by government mandate, Streufert said. Given those realities, the National Restaurant Association and other industry stakeholders have been advancing efforts to create a specific fund to help restaurants.

“We continue to tell Congress and the state that restaurants need relief that truly works for their business model,” Streufert said.

One TRA survey has shown it could take nine months to get back to where sales were before the pandemic, Streufert said, but for now, restaurants are taking it day by day.

“We’re at the beginning of recovery and it will be a long road; there’s cautious optimism,” Streufert said. “We continue to encourage everyone to show each other grace. It’s a completely unprecedented time and situation. It takes a good faith partnership to make this work.”