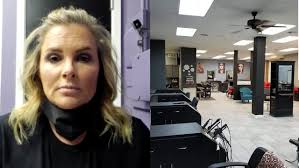 Texas Attorney General Ken Paxton today sent a letter to a Dallas County judge, stating that he abused his authority by putting Shelley Luther, owner of a hair salon, in jail for opening her salon to feed her family.

“I find it outrageous and out of touch that during this national pandemic, a judge, in a county that actually released hardened criminals for fear of contracting COVID-19, would jail a mother for operating her hair salon in an attempt to put food on her family’s table.

“The trial judge did not need to lock up Shelley Luther. His order is a shameful abuse of judicial discretion, which seems like another political stunt in Dallas. He should release Ms. Luther immediately," Paxton said.

Governor Greg Abbott also called for the release of Luther.

"I join the Attorney General in disagreeing with the excessive action by the Dallas Judge, putting Shelley Luther in jail for seven days. As I have made clear through prior pronouncements, jailing Texans for non-compliance with executive orders should always be the last available option.

"Compliance with executive orders during this pandemic is important to ensure public safety; however, surely there are less restrictive means to achieving that goal than jailing a Texas mother," Abbott said.

Dallas Judge Eric Moye held Salon À la Mode owner Shelley Luther in criminal and civil contempt of court for refusing to comply with a restraining order issued in late April, according to court documents. He also ordered the company to pay a fine of $500 for every day the salon violated the court's mandate for the business to stay closed. Luther is planning to appeal the decision.

"The defiance of the court’s order was open, flagrant and intentional," Moye wrote. "The defendants, although having been given an opportunity to do so, have expressed no contrition, remorse or regret for their contemptuous action."

The decision came down the same day Texas Gov. Greg Abbott (R) announced that hair salons and barbershops would be allowed to re-open with modified restrictions on Friday.

Luther in April opened her salon in defiance of a stay-at-home order imposing restrictions on mass gatherings and non-essential businesses around the state. She gained national attention after tearing a cease-and-desist letter she received from a Dallas County judge during a demonstration voicing opposition to quarantine measures.

Dallas County Judge Clay Jenkins sent a cease and desist letter to the owner of the Dallas-area salon on April 24, according to WFAA. Luther also reportedly received a citation for opening the salon.

A temporary restraining order was issued against Luther on April 28 after she continued to keep her shop open. The court said on Tuesday that operations at the salon had continued until the date of Luther's hearing.

At the hearing, Luther reportedly said that she had "no choice" but to keep the salon open. Though she also noted that she had received a loan from the federal government, WFAA reported.

"I need to feed my family and my stylists could not feed their families,” Luther said.

Moye told Luther that he would consider not ordering jail time if she admitted that her actions were selfish and apologized to the officials whose orders she defied. But Luther responded by arguing that it is "not selfish" to continue working to feed her children.

"I have to disagree with you sir, when you say that I’m selfish because feeding my kids — is not selfish," Luther said. "I have hair stylists that are going hungry because they’d rather feed their kids. So sir, if you think the law is more important than kids getting fed, then please go ahead with you decision but I am not going to shut the salon.”