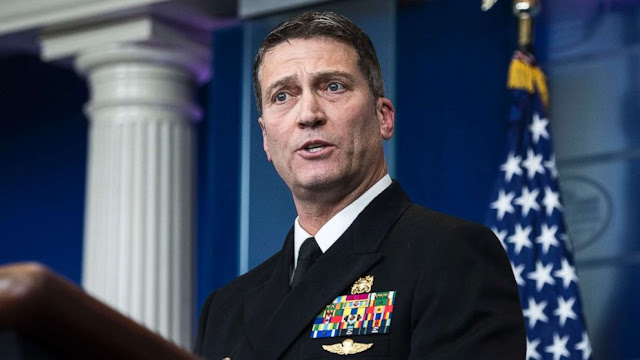 Retired Navy Adm. Ronny Jackson (R) doubled down on a tweet that he made about former President Obama on Wednesday, in which he accused Obama of weaponizing the federal government against President Trump.

A medical doctor, Jackson served as White House physician for both Obama and Trump, before deciding to run for Congress this election cycle in Texas's 13th Congressional District.

"I stand by my comments calling out President Obama's administration for weaponizing our government to spy on President Trump and his supporters," Jackson said in a statement on Thursday.

"I will never apologize for standing up to protect America's national security interests and constitutional freedoms, even if that means triggering liberals and the 'mainstream media,'" he added.

Jackson's initial tweet referred to a series of tweets that Trump made on Mother's Day.

Trump tweeted "OBAMAGATE" and then retweeted conservative commentator Buck Sexton, who claimed that "the outgoing president" — in reference to Obama — "used his last weeks in office to target incoming officials and sabotage the new administration."

The president was later asked to elaborate about his tweets by a Washington Post reporter, though Trump sidestepped the question.

“You know what the crime is. The crime is very obvious to everybody,” Trump replied. “All you have to do is read the newspapers, except yours.”

On Wednesday, acting Director of National Intelligence Richard Grenell released a list of the names of former Obama administration officials who asked for documents that led to the identity of former national security adviser Michael Flynn being "unmasked" between the 2016 election and Trump's inauguration.

The copy of that list includes various well-known Obama aides as well as then-Vice President Joe Biden. In the past, Trump has argued that the Obama administration sought to hurt him politically by leaking selective bits of information to the media. Trump and his allies have pointed to Flynn's "unmasking" as evidence of foul play.

Obama fired Flynn as the head of the Defense Intelligence Agency in 2014 and cautioned the Trump administration against hiring him as national security adviser.

Recently, the Department of Justice dropped a case against Flynn where he was charged with lying to the FBI about calls he had with a Russian official following the 2016 election. Flynn originally pleaded guilty to lying about the calls.

In April 2018, Trump nominated Jackson to be the head of Veterans Affairs, one of the largest Cabinet agencies.

Sen. Lindsey Graham (R-S.C.) announced on Thursday that the Senate Judiciary Committee would start hearings in June on the FBI's investigation into Flynn and Trump's presidential campaign.

Trump on Thursday morning said in a tweet, "If I were a Senator or Congressman, the first person I would call to testify about the biggest political crime and scandal in the history of the USA, by FAR, is former President Obama."

Graham, however, sidestepped the idea that he would force the former president to testify.

“As to the Judiciary Committee, both presidents are welcome to come before the committee and share their concerns about each other. If nothing else it would make for great television. However, I have great doubts about whether it would be wise for the country," he said.