Prevent hay profits from going up in smoke 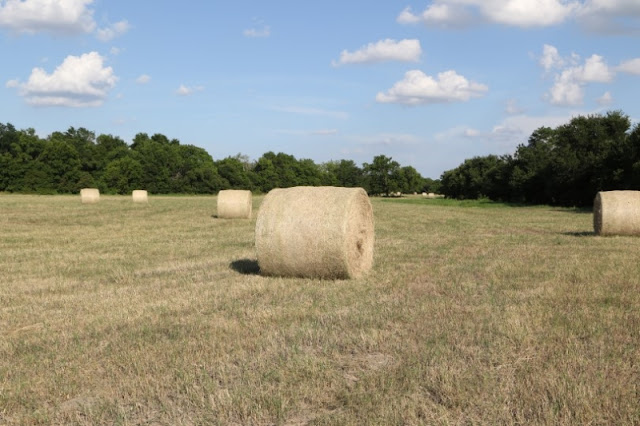 Every year, hay fires cause thousands of dollars in damages to buildings, hay and equipment. But taking the proper precautions can help save farmers from hat loss.

Harvesting and curing hay is a balance between preserving dry matter yields and optimum nutritive value, according to Texas A&M AgriLife Extension Service specialists. For best results, hay should be cured, or dried in the sun, to a moisture level below 18 percent before baling large round bales or to less than 20 percent for small square bales.

Curing may be aided after rainfall or in periods of high relative humidity by using a tedder to turn over the windrows. If not cured properly, hay will continue to respire, which burns up carbohydrates that could otherwise be consumed by livestock.

Mold may also grow, which further consumes available nutrients, produces heat from respiration and can produce toxins that make the hay less palatable. Mold-related heat up to 120 degrees doesn’t cause much damage to nutritional value, but higher temperatures can cause protein breakdown in hay.

Browning, or caramelization, begins to occur around 140 degrees and can further increase temperatures that bring the hay to the point of combustion. The situation is especially dangerous when other dry matter is stored nearby.

Internal bale temperatures of less than 120 degrees are considered normal and safe. AgriLife Extension specialists note temperatures between 120-140 degrees should be monitored closely, but anything between 140-180 degrees is likely to spontaneously combust and should be moved away from other dry haystacks immediately.

High temperatures also bind much of the protein in forage, making it unavailable for animal nutrition. The resulting hay is lower in quality and nutrients.

However, hay must sometimes be harvested in less favorable circumstances or at higher-than-recommended moisture levels.

There are three ways to handle this situation: inhibitors, drying agents and baleage.

Inhibitors or preservatives other than ammonia and urea do not improve feeding value but may reduce storage loss.

Potassium carbonate or sodium carbonate are two kinds of drying agents applied immediately after mowing to speed up the curing process. They’re usually applied as water-based solutions with a surfactant to help spread the solution over harvested forage.

Unlike inhibitors, drying agents do not allow for baling hay at a higher moisture level. Drying agents have no effect on nutritional value.

Some farmers are turning more to baleage, which is a method of baling forage at 45 to 55 percent moisture content and wrapping the bales in airtight plastic.

Aerobic bacteria consume the remaining oxygen within a matter of hours, then anaerobic bacteria take over to preserve the forage in a “pickled” state.

If forage cannot be properly cured, consider one of these alternatives to help keep hay profits from going up in smoke.