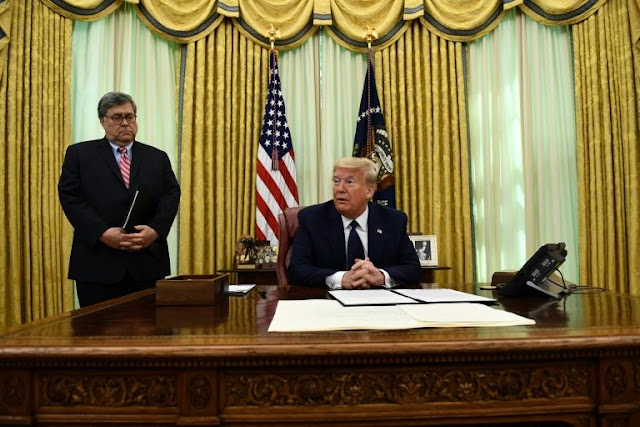 President Trump signed an executive order Thursday aimed at increasing the ability of the government to regulate social media platforms, a marked escalation of his lengthy feud with Silicon Valley over allegations of anti-conservative bias.

The brunt of Trump's focus has been on Section 230 of the Communications Decency Act, a law that gives platforms legal immunity for content posted by third-party users while also giving them cover to make good-faith efforts to moderate their platforms.

Trump, joined by Attorney General William Barr, addressed reporters in the Oval Office on Thursday afternoon before signing the executive order. Reporters were ushered out of the room before witnessing the signing and the White House said shortly thereafter that Trump had signed the order, the text of which has not yet been released by the administration.

The president claimed that the order would strip the liability protection from companies that censor content, have Barr work with states to develop regulations and ensure government funding does not go to companies that suppress free speech. The order also instructs the Federal Trade Commission (FTC) to prohibit social media companies from engaging in “any deceptive acts or practices affecting commerce,” Trump said.

"We're here today to defend free speech from one of the greatest dangers it has faced in American history, frankly, and you know what's going on as well as anybody. It's not good," Trump told reporters.

He accused social media companies of having “unchecked power to censure, restrict, edit, shape, hide, alter virtually any form of communication between private citizens or large public audiences.” He also said that if he were able to shut Twitter down, he would.

Barr did not give details on what legislation focused on Section 230 could look like. Trump suggested that they could just "remove or totally change 230."

The White House first acknowledged vague plans for the executive order on Wednesday evening. Officials worked to finalize the details over the following day, as a draft version leaked out that closely lines up with Trump’s description.

That order would direct an agency within the Commerce Department to file a petition with the Federal Communications Commission (FCC) to clarify the scope of Section 230, a proposition that has already drawn rebukes from Democratic members of the commission.

Another section of the order would encourage federal agencies to review their spending on social media advertising.

The central thesis of Trump’s criticism of social media platforms — that they make content moderation decisions based on anti-conservative bias — has not been substantiated.

Several lawsuits claiming suppression of conservative viewpoints on social media platforms have been rejected by courts, including one brought by far-right activist Laura Loomer this week.

Fundamentally, Trump cannot rewrite Section 230 without Congress’s help. Any efforts by agencies like the FCC to make determinations about how the law is applied would almost definitely be challenged and ultimately become a matter for a judge to decide.

Trump has yet to formally comment on efforts from some of his supporters in Congress to overhaul the 1996 law.

Sen. Josh Hawley (R-Mo.) and Rep. Matt Gaetz (R-Fla.) on Wednesday both announced separately that they are working on legislation to strip Twitter of its liability protections.

The executive order follows a multiday feud between the president and Twitter. The social media giant applied a label to one of the president's tweets for the first time Tuesday.

The warning, urging users to "get the facts about mail-in ballots," was attached to two posts in which Trump railed against mail-in voting in California, claiming without evidence that the practice is full of fraud.

Trump pounced on the fact check, accusing the company of bias against conservatives.

Trump said Twitter was "stifling FREE SPEECH" and then threatened to “close” social media platforms in a series of posts on the platform.

Since then, Twitter has placed similar labels on hundreds of tweets from a variety of figures across the political spectrum.

The White House has considered taking action against social media companies for years, reportedly circulating an executive order last year titled “Protecting Americans from Online Censorship” that would let the FCC change how Section 230 is interpreted.