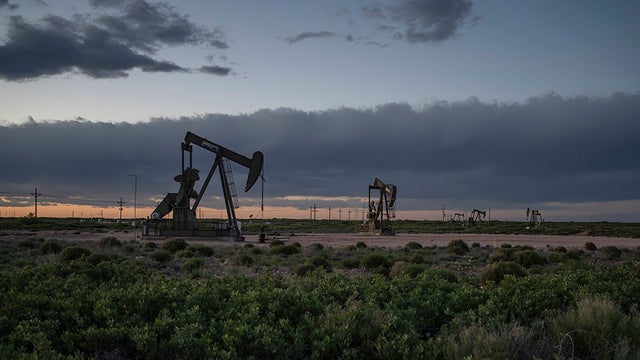 Communities reliant on the oil and gas industry say it may take years, not months, to bounce back from the coronavirus pandemic that’s ravaging local economies.

Even in towns accustomed to the boom-and-bust cycle of oil markets, government officials say they’ve been hit with a double whammy.

With most service sector businesses shuttered to comply with stay-at-home orders, oil companies are scaling back production and laying off workers -- a crushing combination in places where the health of the economy is tied firmly to the fossil fuel industry.

“The massive oil slowdown and the price drop affects literally every sector of the economy because the highest paid job sector is oil and gas and that basically supports a whole spectrum of other jobs,” said Alaska state Rep. Chuck Kopp (R).

“Everything from our gym and fitness centers, nail parlors and salons, bars and breweries -- which are very popular in Alaska -- movies theaters, all the things you would normally see folks do are all severely restricted right now because of the shutdown,” he added. “But that recovery is going to take even longer with the severe slowdown in the oil and gas industry.”

Oil prices took a nosedive in April, trading at a record low by closing at negative $37 as futures traders sought to pay others to take physical possession of what had become a surplus of oil worldwide.

Even as companies have slashed budgets and cut production, there’s still a global surplus, driven in part by a production battle between Saudi Arabia and Russia and exacerbated by a 30 percent drop in demand as lockdowns became the norm.

The low prices dealt a severe blow to states that get most of their revenue -- and offer most of their government services -- from oil and gas taxes. The same is true for cities where sales and property taxes are both supported by income from the oil and gas industry.

North Dakota, where more than 50 percent of state revenue comes from the oil and gas industry, is another state expecting a massive revenue decline.

In Williams County, the main source of oil activity in the state, roughly 50 percent of the town’s economy has a direct tie to the oil industry. But since March 21, about 4,500 unemployment claims have been filed in the county, about 12 percent of its population.

The layoffs come as companies have cut production.

“The hope is the reduction in energy production worldwide brings us into balance sooner rather than later. Even if that still happens, think it's going to take years to heal from this and not months,” said state Sen. Brad Bekkedalh (R), who also serves as the finance commissioner in Williston, the county seat.

While cutting production usually gives prices a boost, this crash has been even more severe.

Ryan Rauschenberger, North Dakota’s tax commissioner, said he has never seen prices drop this low. That’s bad news for a state that banked much of its two-year budget cycle decisions on a forecast that put oil closer to $50 a barrel.

“Oil reigns supreme,” he said. “North Dakota is more reliant than any other state on oil production and exploration as a percentage of our state budget.”

The severity of the price drop will make it that much harder for the industry to get up and running again.

Prices have gotten so low, now hovering around the $20 mark, that companies have “shut in” wells, essentially capping them so workers aren’t needed and so the oil can be pumped later when prices are more favorable.

But many of the workers are transient, particularly in rural, low population states like North Dakota and Alaska where many employees come in from out of state when drilling is most active.

When jobs dry up, many of them will leave the state.

The effects will be compounded by all the other economic impacts linked to the coronavirus.

“These energy states are going to take a double wallop,” said Barbara Rosevicz, director for the state fiscal health project at the Pew Charitable Trusts. “It’s not just that their economic activity has been undermined by the drop in price of oil...It's that the rest of their economy has also been hit by stay at home orders.”

“So to the extent that states and communities rely on sales tax and personal income taxes those are also going to get hit,” she added.

After the Great Recession, it took states years to return to earlier spending levels, an even more difficult task for oil states that were once again hit by an oil price drop around 2014.

But in this case, oil states may be better prepared for a pandemic-related downturn than some of their counterparts.

“Oil states are the ones that generally have greater reserves because they’ve been through boom and bust before,” Rosevicz said.

But the speed at which this downturn hit will prove challenging for some localities.

“As a lifelong resident of Wyoming, I’ve been through some of the other booms and busts we've had, and this was noticeable -- maybe not overnight, but within a week things changed pretty dramatically,” said Jim Willox, a county commissioner in Converse County, Wyoming, the state’s top oil producing county.

“Prior busts or recessions have been more gradual or been more regionalized,” he said, adding that he’s not sure some of the oil companies will have enough cash to pay their taxes.

Last year was once of the best oil years for Converse County, and it was expecting record tax income. Now, Willox isn’t sure how much they'll bring in.

“They knew the bill was coming and they should have tucked away money when it was due,” he said of oil companies. “But I'm not sure they did that.”

The economic anxiety has been a painful reminder for oil outposts that their economies and lifestyle are not as isolated as they once were.

“I think this global pandemic has really reminded Alaska, which normally views itself as really independent, of how interconnected we are,” Kopp said.