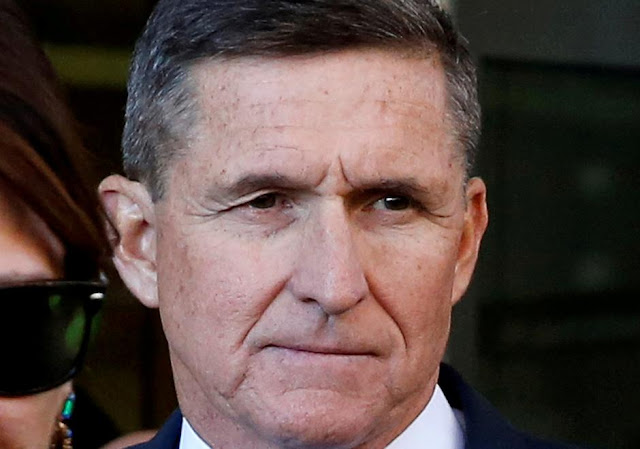 The Department of Justice is moving to drop its case against former national security adviser Michael Flynn for charges of lying to the FBI about his contacts with Russia shortly before President Trump took office.

Flynn had entered into an agreement in 2017 to cooperate with DOJ and plead guilty, but he had since withdrawn from the plea agreement and was fighting the charges.

Documents released last month have fueled conservative claims that the FBI was out to entrap Flynn, who was ousted from the White House after misleading Vice President Pence and others about his contacts with the Russian ambassador.

The DOJ said in a court filing Thursday that it no longer believed it could make a case against the former three-star Army general.

"The Government is not persuaded that the January 24, 2017 interview was conducted with a legitimate investigative basis and therefore does not believe Mr. Flynn’s statements were material even if untrue," the department said in its motion. "Moreover, we [do] not believe that the Government can prove either the relevant false statements or their materiality beyond a reasonable doubt."

The department's motion will need to be approved by a judge.

Jeffrey Jensen, the U.S. attorney in St. Louis who Attorney General William Barr had tapped to review Flynn's case, said he had recommended dropping the charges.

“Through the course of my review of General Flynn’s case, I concluded the proper and just course was to dismiss the case," Jensen said in a statement. "I briefed Attorney General Barr on my findings, advised him on these conclusions, and he agreed.”

Flynn's attorney did not immediately respond when asked for comment. His legal team had been accusing the government for months of malfeasance in its investigation and of entrapping Flynn during his interrogation.

Flynn initially admitted to urging Russian Ambassador Sergey Kislyak not to respond by escalating the Obama administration’s December 2016 sanctions on Moscow for interfering in the U.S. presidential election. After that call, Russia said it would not impose any retaliatory sanctions.

Flynn also confessed that he falsely told investigators he had not discussed Russia’s response to the sanctions with Kislyak.

The DOJ said it believed the FBI investigation into Flynn had been conducted improperly after uncovering new internal bureau communications.

According to those records, the FBI had initially moved to close the investigation in 2016 after finding a lack of evidence, but the bureau neglected to approve the move, allowing agents to probe Flynn's conversations with Sergey Kislyak, a Russian diplomat.

The filing submitted Thursday also notes that FBI officials had expressed doubt about whether they believed Flynn had lied during his interview.

Just before the department moved to drop the case Thursday, one of the prosecutors abruptly withdrew from the case with a one-sentence court filing.

Former FBI deputy director Andrew McCabe, who went on to briefly serve as acting director before being fired by the Trump administration, blasted the DOJ over its conclusions in the brief filed Thursday.

"The Department's position that the FBI had no reason to interview Mr. Flynn pursuant to its counterintelligence investigation is patently false, and ignores the considerable national security risk his contacts raised," McCabe said in a statement. "Moreover, the Department’s position contradicts the findings by both the Special Counsel and the Office of the Inspector General."

The developments come amid Trump's recent public attacks on the case against his former national security adviser.

"What happened to General Michael Flynn, a war hero, should never be allowed to happen to a citizen of the United States again!" the president tweeted last week.

On Thursday, Trump told reporters that he was pleased to hear the DOJ's decision and wanted people "to pay a big price" for prosecuting his former adviser.

"I didn't know that was happening at this moment," Trump said. "I felt it was going to happen just by watching and seeing, like everybody else does. He was an innocent man. He is a great gentleman. He was targeted by the Obama administration and he was targeted in order to try and take down a president."

"And I hope a lot of people are going to pay a big price because they're dishonest, crooked people," he added. "They're scum and I say it a lot, they're scum, they're human scum. This should never have happened in this country.

The case has become a flashpoint between the president and Democrats who have pushed for investigations into his administration. Rep. Jerrold Nadler (D-N.Y.), the chairman of the House Judiciary Committee, called the move to drop the case "outrageous" and promised to bring Barr to testify before his panel soon.

"Flynn PLEADED GUILTY to lying to investigators," Nadler said on Twitter. "The evidence against him is overwhelming. Now, a politicized DOJ is dropping the case. The decision to overrule the special counsel is without precedent and warrants an immediate explanation."

The president's allies, meanwhile, celebrated what they saw as a rebuke to the special counsel's investigative overreach.

Democrats have accused the administration of interfering in Justice Department decisions. In February, prosecutors recommended that Roger Stone, the longtime provocateur and former Trump campaign adviser, serve up to nine years in prison for lying to Congress and witness tampering, only to be overruled by the DOJ in favor of a more lenient sentence.

That prompted four of the prosecutors to withdraw from the case, one of them resigning from the department entirely.