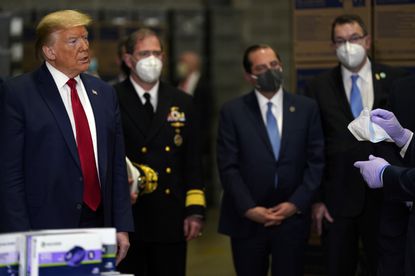 I really, really hope President Trump and Vice President Pence don’t contract the coronavirus. Trump certainty seems to be full of energy for a 73-year-old man, but we know how dangerous this virus is to older men, and we saw how it put 55-year-old Boris Johnson into an intensive-care unit.

The report that the rapid test being used at the White House could have a high error rate is particularly unnerving. NYU researchers contend the error rate could be nearly half; Abbott Laboratories says that’s nonsense and that those running that study used the test the wrong way; they contend the test detects 90 percent of infections.

Here’s the problem: Think about how many people are being tested at the White House each day. (Between three hundred and four hundred people work in the building, although only a fraction of those come in contact with the president.)

Let’s be really optimistic and say that Abbot is overstating the rate of false negatives, and that only one out of every twenty is a false negative. If you’re testing fifty people a day at the White House, then two or three people per day are getting a false negative and walking around asymptomatic but still shedding the virus, that could still lead to serious problems! It only takes one carrier to give it to the president or vice president!

Ideally, the president would be minimizing his in-person interaction with others. The president doesn’t want to wear a mask. That’s his choice, although it would still provide better protection if he wore one away from cameras. Hopefully Trump is back to avoiding handshakes again, everyone’s washing their hands religiously, and all of the minimally invasive precautions are being taken.

The federal government has its hands full responding to this outbreak as is; we don’t need to throw another problem on top of it with a president who is (hopefully only briefly) incapable of performing his duties.