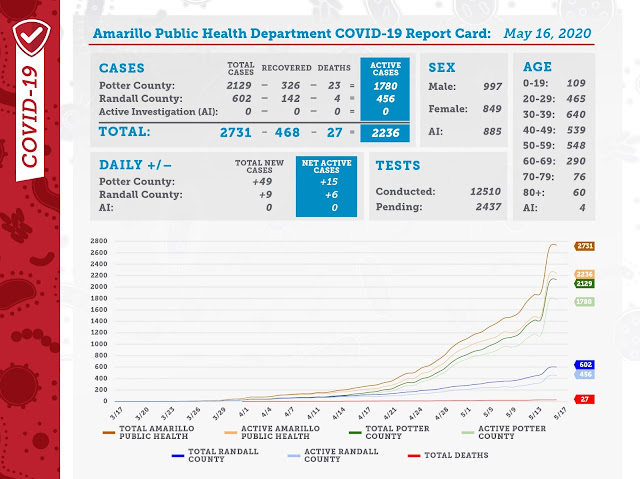 Governor Greg Abbott today released a statement and detailed the ongoing containment plan for the COVID-19 outbreak in Amarillo. On Monday, May 4th, Governor Abbott deployed a Surge Response Team (SRT) to Amarillo consisting of Medical Incident Support Team personnel from the Texas Emergency Medical Task Force (EMTF) and 70 members of the Texas National Guard. These teams conducted a site survey of high risk areas to begin testing employees in meat packing facilities. Today, Texas is seeing the results of those tests and will continue to see these results in targeted areas over the next two weeks.

In addition to the SRT, the United States Department of Agriculture, the Centers for Disease Control and Prevention, the Texas Division of Emergency Management (TDEM), the Texas Department of State Health Services (DSHS), BCFS Health and Human Services, and local officials are all responding to the outbreak. Plants with widespread outbreaks have temporarily shut down for thorough disinfection. Individuals with a positive test who cannot otherwise isolate are offered area hotels, and DSHS is maintaining an alternate care site for patients that do not require hospitalization. Furthermore, the Governor is sending an additional allotment of remdesivir to the Amarillo area.

"As Texas continues ramping up its testing capabilities, there will be an increase in positive cases as the state targets the most high-risk areas: nursing homes, meat packing plants and jails," said Governor Abbott. "That is exactly why I established Surge Response Teams. By immediately deploying resources and supplies to these high risk areas, we will identify the positive cases, isolate the individuals and ensure any outbreak is quickly contained, which is the strategy being deployed in Amarillo."

110 ventilators available, with the ability to move more to the region.

These actions follow the Governor’s May 2nd deployment of mobile testing teams to provide free COVID-19 testing for Amarillo and surrounding communities. Since their inception, these mobile test collection teams, supported by TDEM, Texas Military Department, DSHS, and the EMTF, have tested over 34,500 Texans in 212 counties across the state.