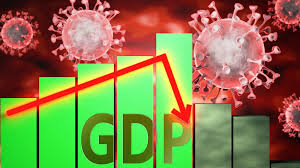 America's economy shrank at an annualized rate of 5 percent in the first quarter of the year, according to the Commerce Department's second estimate, more than the 4.8 percent level first announced.
The first quarter's economic numbers included two months of normal growth followed by a devastating March, as the coronavirus pandemic took hold and lockdowns across the country slowed commerce to a trickle.
"This led to rapid changes in demand, as businesses and schools switched to remote work or canceled operations, and consumers canceled, restricted, or redirected their spending," the report noted.
The revision, which relies on more complete data, found lower levels of private inventory investment, though also found somewhat higher levels of personal consumption expenditure and nonresidential fixed investment.
The second quarter, which ends in June, is expected to see a far sharper decline, which some estimates have put as high as an annualized 40 percent.
But the economy is expected to rebound to some extent in the third and fourth quarters, assuming the country manages to avoid a second wave of the virus.
All in all, the economy is still expected to shrink between 5 and 6 percent for the year with expectations that double-digit unemployment will continue into 2021.
National World

High Plains Pundit Podcast: Vote against Props A, B, and C

In the latest episode of the High Plains Pundit Podcast, Dan discusses why the citizens of Amarillo should vote against Props A, B, and C. Dan also had a very interesting call from Amarillo resident Trent Rosser.