Gallup, New Mexico placed on lockdown due to coronavirus outbreak 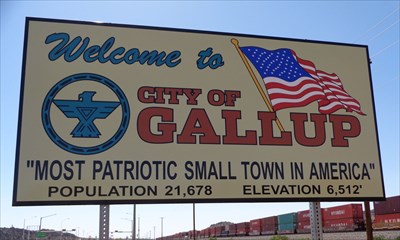 New Mexico Gov. Michelle Lujan Grisham (D) announced she is putting the city of Gallup on lockdown after a spike in coronavirus cases in the area.

The governor said in a statement that starting Friday at noon she is closing all roads leading into Gallup from 5 p.m. to 8 a.m. daily and that vehicles can only have two people maximum. Residents of the city are encouraged to stay in Gallup except for emergency outings and trips essential for health, safety and welfare.

Lujan Grisham decided to take the action under the Riot Control Act after outgoing Gallup Mayor Jackie McKinney and new Mayor Louis Bonaguidi requested she shutter the city in the midst of a sharp rise in cases. McKinley County, where the city is located, has reported 1,027 positive cases of COVID-19 — more than 30 percent of the state’s total positive COVID-19 cases.

“The spread of this virus in McKinley County is frightful,” said Lujan Grisham, “and it shows that physical distancing has not occurred and is not occurring. The virus is running amok there. It must be stopped, and stricter measures are necessary. A problem in one part of our state, with a virus this dangerous and this contagious, is a problem for our entire state.”

Those in violation of the order, which expires at noon Monday, will be punished with a misdemeanor charge.

The mayors who pushed for Lujan Grisham to close the city praised her decision, saying serious action had to be taken to combat the outbreak.

“I recognize this request is unusual and constitutes a drastic measure, and the emergency powers set out under the Riot Control Act should be invoked sparingly,” said Bonaguidi. “However, the COVID-19 outbreak in the city of Gallup is a crisis of the highest order. Immediate action is necessary.”