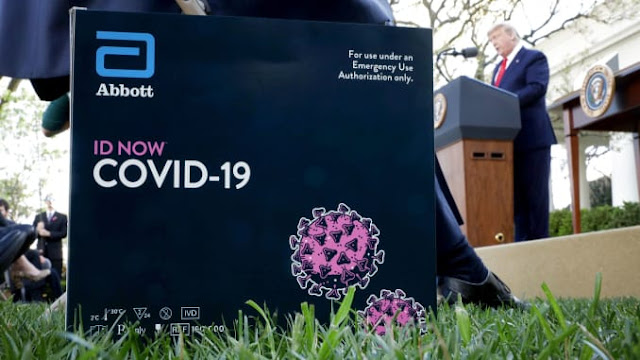 The Food and Drug Administration (FDA) has granted emergency use authorization to a new coronavirus antibody test from Abbott Labs, the company announced Monday.

Abbott said it plans to ship nearly 30 million antibody tests globally in May, and will have capacity for 60 million tests in June.

Companies across the country have been pouring money into developing antibody blood tests, which can identify people who have been exposed to the virus and might have immunity, even if they have never been diagnosed.

Antibody tests have been heralded by state and federal leaders who hope they can help guide decisions about when and how to reopen the country.

However, the science around immunity is unclear. It is not known yet whether a positive result for antibodies means a person is immune to the disease, and experts caution against making major decisions based on the test results.

The FDA has now granted emergency authorization to four of Abbott's COVID-19 tests, including a rapid result diagnostic that's being used at the White House. Emergency authorization means labs will be allowed to use the test even though it has not been formally approved or cleared by the agency.

Abbott's authorization comes after the FDA tightened its policy around antibody tests last week, requiring manufacturers to apply for emergency authorization within 10 days of the products hitting the market, and submit validation data.

The agency's original policy, which allowed companies to self-verify their tests, had been in place since mid-March. The change was made after numerous companies marketed tests inappropriately with little to no oversight, raising the potential for a surge in inaccurate results.