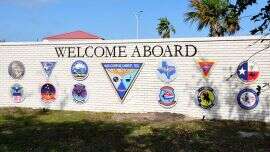 The naval air station at Corpus Christi, Texas, has been put on lockdown after a shooter opened fire on the base Thursday morning.

The station posted on Facebook that a shooter was active on the base “in the vicinity of the North Gate” and that naval security forces responded at about 6:15 a.m. local time.

The shooter has been neutralized, according to an update, but all gates on the installation are still closed while the scene is being processed.

“NCIS and local law enforcement are on scene. More information will be provided as it becomes available,” the most recent Facebook post says.

The Corpus Christi Police Department confirmed the shutdown due to an "incident at one of the gates" and encouraged people to "avoid the area entirely."

Texas A&M University Corpus Christi also reported it was on lockdown until updating that the situation was "resolved" with "no threat" to its campus.