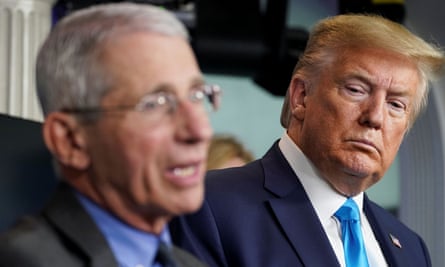 The White House on Monday shot down speculation that President Trump may move to fire Anthony Fauci, the government's top infectious diseases expert, after the president shared a tweet a night earlier that contained the hashtag "#FireFauci."

Gidley's statement did not mention that the tweet Trump shared contained the hashtag, instead claiming the president's "tweet clearly exposed media attempts to maliciously push a falsehood about his China decision in an attempt to rewrite history."

“Dr. Fauci has been and remains a trusted advisor to President Trump,” Gidley said.

One of Trump’s many tweets Sunday night defending his response to the coronavirus pandemic quoted a former GOP congressional candidate who said it was “time to #FireFauci,” citing his Feb. 29 comments that there was not yet a need for Americans to alter their day-to-day lives.

"Sorry Fake News, it’s all on tape. I banned China long before people spoke up," Trump tweeted, a reference to his administration's move in late January to restrict travel from China.

The president's tweet spurred speculation that he may be souring on Fauci, who has been the director of the National Institute of Allergy and Infectious Diseases since 1984.

Fauci is facing a groundswell of conservative criticism after he said on CNN on Sunday morning that more lives could have been saved if stay-at-home measures were implemented earlier than mid-March.

The comments irked Trump allies who viewed them as revisionist history given how Fauci’s own public statements evolved throughout January and February as scientists learned more about the virus and it spread through the U.S.

Even if Trump wanted to fire Fauci, he would face difficulty doing it without cause because the doctor is not a political appointee. Removing Fauci would also likely set off backlash among even some Republicans who have urged the president to listen to his health experts.

The criticism of Fauci comes amid a concerted effort among Trump and his supporters to shift blame away from the White House for its handling of the coronavirus, which has infected more than 560,000 people in the U.S. and killed more than 22,000 in the country.

Fauci has emerged as one of the most prominent faces of the administration's coronavirus response given his ubiquitous media presence and his willingness to correct Trump's inaccurate statements about a timetable for a vaccine and the efficacy of hydroxychloroquine, an anti-malaria drug the president has touted as a potential treatment for the coronavirus.

Trump has previously downplayed any rift between the two, praising Fauci as "extraordinary" and joking with the doctor during briefings.