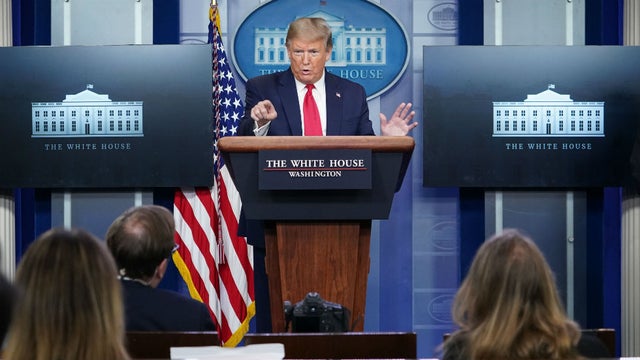 President Trump on Monday used the White House briefing room to lash out at critics of his response to the coronavirus outbreak, rattling off a litany of grievances about press coverage and airing a reel of cable news footage that portrayed his actions in a positive light.

The president sought to use a briefing ostensibly intended to inform the American public about the latest developments in the battle against the virus to frame his handling of the pandemic as a success. He bristled at any criticism and picking a fight with journalists in the room before experts delivered any update on the disease that has killed more than 22,000 people in the U.S.

"We really have done this right. The problem is the press doesn’t cover it the way it should be," Trump said.

The president's opening remarks appeared to be an extension of his weekend Twitter storm in which he stewed over a New York Times story that said he was warned repeatedly about the threat of a potential pandemic in January and February. The White House first imposed social distancing guidelines in mid-March.

Trump has been particularly sensitive to criticism that he was slow to respond to the virus and has blamed the press, governors and the World Health Organization, among others, for the rising number of cases and lack of preparedness.

But Monday's press briefing marked a striking extension of his defense, using the briefing room to air a campaign-style clip and complaining repeatedly that he has not received a fair amount of praise in news stories.

"The press has not treated these incredible people who have done such a great job — they haven’t treated them fairly. They’re way off. We were way ahead of schedule," Trump said. "Everything we did I was criticized because I was too early."

Defensive and combative, Trump repeatedly highlighted his decision to restrict travel from China in late January before there were any virus-related deaths confirmed in the U.S., arguing he did so sooner than many experts and lawmakers suggested was necessary. He returned to the travel restrictions several times as reporters sought to ask about what steps his administration took between that order and instituting social distancing guidelines more than a month later, a period during which the number of cases grew.

Trump then aired roughly three minutes of footage that resembled a campaign ad on screens set up behind the podium. The video featured clips of cable news doctors saying in January that the coronavirus did not represent an imminent threat to the U.S., Trump announcing measures such as expanded telehealth options and a national emergency, and Democratic governors thanking the president for offering federal assistance to states responding to the virus.

Asked where the video came from, Trump said it was produced in the White House in the hours before the briefing.

The admission of the apparent blurring of White House business with campaign promotion promptly drew the attention of ethics watchdogs.

"So our tax dollars and the presidential mansion we own are now being used to broadcast campaign ads?" tweeted Walter Shaub, the former head of the Office of Government Ethics.

Trump and the White House have come under bipartisan criticism at times during the pandemic, which as of Monday evening has infected at least 577,000 people in the U.S. The president in January and most of February publicly downplayed the threat of the virus, saying it was "under control," that the number of cases would soon drop to "close to zero" in the U.S. and that the virus would dissipate in April with warm weather.

The White House's promotional video highlighted only one administration action in the whole month of February, when the Centers for Disease Control and Prevention shipped its first testing kits. The president continued to hold campaign rallies that month before tapping Vice President Pence to lead the federal response at the end of February.

Asked why he felt the need to string together video clips touting his own response, Trump told reporters, "Because we’re getting fake news, and I like to have it corrected."

Trump's coronavirus response will likely define the looming presidential race between him and presumptive Democratic nominee Joe Biden, whom the president name-checked multiple times during his diatribe.

“More than 20,000 Americans have died, hospitals and states still can’t get the supplies they need, testing is failing, and instead of updating Americans on the coronavirus pandemic, Trump commandeered the briefing to run campaign propaganda to sooth his small ego and pathetically try to cover up for his own failed response. It won’t work, and the American people deserve better," Democratic National Committee official Daniel Wessel said in a statement.

Trump has characterized his administration's response to the disease in unflinchingly positive terms, at various times calling it "fantastic" and "incredible" and declaring the government had done a "hell of a job." He highlighted on Monday the equipment, including hospital beds and ventilators, that has been distributed nationwide to states in need.

Still, governors and hospitals across the country have complained of a disorganized process that makes it difficult to acquire critical supplies.

The briefing is likely to renew discussion around whether news networks should air the White House briefings in their entirety. Critics have argued that Trump spreads misinformation or uses the briefings as pseudo-campaign platforms rather than sharing meaningful updates about the virus. Even some of the president's allies have urged him to cede the spotlight to medical experts.

As the president queued up the video reel on Monday, CNN and MSNBC cut away from the briefing.