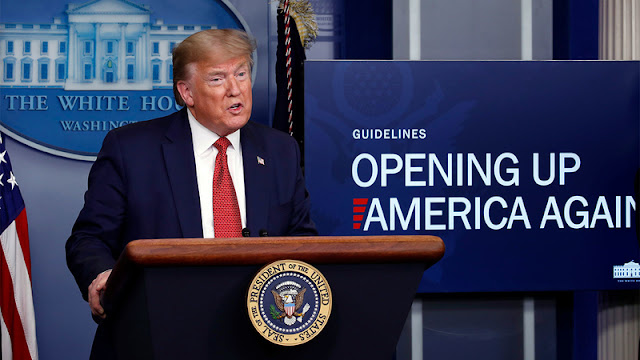 President Trump unveiled guidance for a phased reopening of parts of the U.S. economy that leaves the final decisions up to governors.

The 18-page document, which was distributed to governors during a conference call Thursday afternoon, recommends that states see a downward trajectory in the number of confirmed coronavirus cases as well as flu-like symptoms before they move to lift stay at home orders and other restrictions meant to curb the spread of the virus.

It also recommends that states and regions see a decline in documented cases over a period of 14 days, ensure that hospitals can treat all patients without crisis care, and have a robust testing program in place including antibody tests for at-risk health care workers before moving to the phased reopening.

The goal of the guidelines, according to the White House documents, is to mitigate the risk of a resurgence in cases and protect vulnerable populations, including the elderly and those with underlying health conditions.

It also explicitly states that the steps are implementable at the statewide or county-level at the “discretion” of individual governors.

The guidelines include specific recommendations for individuals and employers. They are also broken up into three phases.

The first phase largely urges existing measures to remain in place while allowing certain businesses, such as gyms, to reopen if social distancing is possible.

The second phase makes recommendations for states and regions with no evidence of a rebound of COVID-19 that have twice satisfied the initial criteria on cases, hospitals and testing. It urges all vulnerable individuals to shelter in place and encourages others to exercise social distancing in public. In this phase, officials also say that non-essential travel can resume, schools can reopen, and large venues, gyms and bars can operate with social distancing steps in place.

The third phase, which is recommended only for states that have shown no signs of a spike in cases after restrictions are lifted and have satisfied the initial criteria a third time, allows public interactions and visits to nursing homes to resume and lets bars and restaurants expand their capacity. The third phase still encourages individuals to socially distance when possible and limit their time in large gatherings.

Trump will publicly outline the federal plan at a news conference scheduled for 6 p.m. Trump, Vice President Pence and Anthony Fauci held a call with governors at 3 p.m. to detail the suggestions.

The coronavirus, which has infected more than 653,000 people in the U.S. and resulted in over 31,000 domestic deaths, has cratered the economy as governors close non-essential businesses and urge residents to stay in their homes. Over 22 million Americans have filed unemployment claims in a period of just four weeks and business owners have scrambled to acquire grants and loans to stay afloat.

Trump and his top aides have in recent weeks expressed a desire to reopen businesses as soon as early May in a bid to revive the economy, though public health experts and state officials have warned that doing so will not be safe without a dramatic increase in testing and contact tracing capabilities.

The president this week convened a number of economic advisory groups with more than 200 industry leaders and roughly 100 lawmakers to provide insight on how to go about rejuvenating the economy. But many of those figures warned Trump that consumers would be unlikely to fully re-engage until they felt there was adequate testing, therapies or even a vaccine that made them feel safe.

Multiple news outlets reported that Trump informed governors they would "call your own shots," and that some could choose to begin scaling back social distancing guidelines prior to May 1, echoing remarks he made publicly a day earlier.

The deferral to governors is a far cry from Trump's assertion on Monday that he had "total authority" to dictate to states when to begin loosening social distancing guidelines that have hampered the economy. But Trump had in recent days reversed course and said he would "authorize" governors to move forward as they saw fit, after the remark inspired broad pushback from legal scholars and governors.

The shift is a concession that state leaders have mostly set policy in combating the coronavirus to date, and therefore will play a leading role in determining how best to ease back restrictions.

Multiple regional coalitions have formed this week as states turn to one another to determine how best to lift advisories that called for limits on public gatherings, closures of non-essential businesses and other restrictions to curb the spread of the virus. All but seven states have issued stay-at-home orders to prevent people from spreading the virus, and many have recently extended those orders.

Trump has expressed optimism that more sparsely populated states like Iowa, Nebraska or Idaho could begin reopening their economies sooner than others. But some models project that certain states, including Iowa and Nebraska, may not hit their peak number of cases for a couple more weeks, meaning they may not see a downward trajectory until after that.

The guidance does delegate key responsibilities to states as they determine how to lift restrictions. It calls for states to set up testing and contact tracing needed to quickly identify new clusters of cases, screen for asymptomatic cases and supply personal protective equipment to front-line healthcare workers.