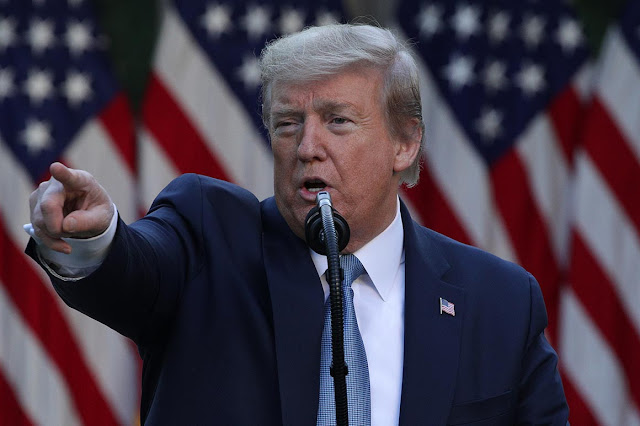 President Trump on Wednesday threatened to use his executive power to force both chambers of Congress to adjourn if the Senate did not confirm his nominees for vacancies across the administration.

The president, during a coronavirus briefing in the Rose Garden, offered a lengthy diatribe against what he described as congressional obstruction and argued confirming his nominees was more urgent than ever amid the pandemic.

"The Senate should either fulfill its duty and vote on my nominees or it should formally adjourn so I can make recess appointments," Trump said. "We have a tremendous number of people that have to come into government. And now more so than ever before because of the virus and the problem."

Lawmakers in both chambers are not expected to return to the Capitol until May 4 but both the House and Senate have been conducting pro forma sessions in the meantime. That means the Senate is technically in session and Trump may not make recess appointments.

"The current practice of leaving town while conducting phony pro forma sessions is a dereliction of duty that the American people can not afford during this crisis," he said. "It is a scam, what they do. It’s a scam. And everybody knows it and it’s been that way for a long time."

Article II, Section 3 of the Constitution grants Trump the power to "on extraordinary occasions, convene both Houses, or either of them, and in case of disagreement between them, with respect to the time of adjournment, he may adjourn them to such time as he shall think proper."

That means that in order for the president to step in and dismiss both, the GOP-controlled Senate would have to adjourn while the Democrat-held House objected. Senate Democrats also have procedural tools to prevent the Senate from adjourning.

The National Constitution Center noted that "no President has ever exercised" the authority.

"Perhaps it’s never been done before, nobody’s even sure if it has," Trump said. "But we’re going to do it. We need these people here. We need people for this crisis, and we don’t want to play any more political games."

Jonathan Turley, a constitutional law professor who appeared as a GOP witness during the House impeachment hearings, warned Trump against taking the step.

"The President just said that he may unilaterally adjourn Congress. ... This power has never been used and should not be used now," he tweeted.

Senate Republicans were expected to set up another three weeks of pro forma sessions on Thursday afternoon to last through the chamber's new May 4 return date, after the recess was extended because of the coronavirus. Spokesmen for Senate Majority Leader Mitch McConnell (R-Ky.) didn't immediately respond to a request for comment about if they would now try to pass a resolution by unanimous consent.

The Trump administration has long been plagued by vacancies across the government. Trump has declined to nominate full-time appointees to key positions, instead relying officials in acting capacities.

One hundred and fifty of 749 "key positions" tracked by The Washington Post and Partnership for Public Service do not have nominees, while another 15 are awaiting nomination.

The Department of Homeland Security, a key agency in guarding against the coronavirus and other national security threats, has not had a full-time secretary in over a year. A number of other top positions in the department remain unfilled.

Trump cited the director of national intelligence, two members of the Federal Reserve Board, the undersecretary of agriculture responsible for administering food security programs and the head of the U.S. Agency for Global Media as nominees he has put forward who are awaiting confirmation amid the pandemic.

Trump's comments are likely to pour new fuel into the fight over nominations, which have emerged as a lightning rod in recent years. Senate Republicans went "nuclear" in 2019 to change the Senate's rules and cut down on the amount of time it takes to confirm most executive nominees and district judges. But Democrats are still able to force McConnell to eat up days of floor time for a single nomination under the chamber's rules.

Trump touted the number of judicial nominations, a top priority for McConnell, confirmed by the Senate: 193. But he argued that nominees for the executive branch were stuck in limbo for up to years because Democrats were "holding this up."

"It's a very unfair system," Trump said. "There's no time for anybody else and many of these people have been waiting for two and a half years. ...We can't get them approved by the Democrats. ...It's just a concerted effort to make life difficult."

It's unclear what prompted Trump to levy his attack on the congressional confirmation process on Tuesday, but it marked the latest instance of the president using his coronavirus briefings to take up political fights as his White House comes under criticism for its handling of the pandemic.

He has previously chastised presumptive Democratic presidential nominee Joe Biden during briefings, described Senate Minority Leader Charles Schumer (D-N.Y.) as a "lightweight" and warned lawmakers against conducting "partisan investigations" after the House convened a special committee to exam the federal response to the pandemic.

Trump has also used the briefings to push other proposals in line with his broader agenda. He rolled out increased narco-terrorism patrols earlier this month and announced on Tuesday that his administration would put a hold on funding for the World Health Organization (WHO), accusing it of being too trusting of China.