Trump: 'Some governors have gone too far' on coronavirus restrictions 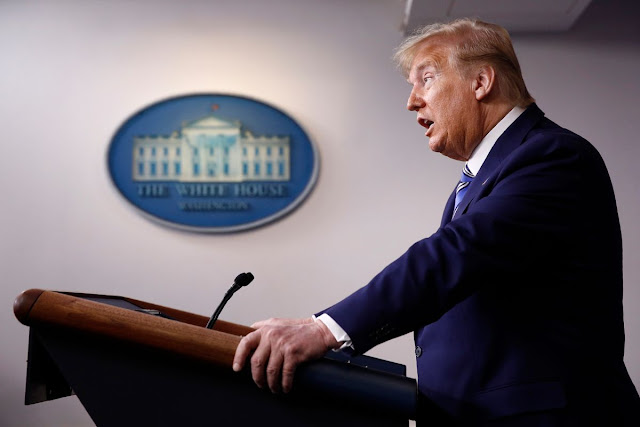 President Trump on Sunday said he believes some governors have "gone too far" in imposing restrictions meant to slow the spread of the coronavirus.

Trump told reporters at a White House briefing that he did not have an issue with the protesters who have flouted social distancing guidelines to voice displeasure with the restrictions, which have shuttered businesses and spiked unemployment.

The president initially declined to specify any particular governor he thought had gone too far before knocking Michigan Gov. Gretchen Whitmer (D) and Virginia Gov. Ralph Northam (D), suggesting the latter deserved to be protested for signing new gun laws.

Whitmer has seen her name floated as a possible vice presidential pick, which may have made her a bigger target for Trump.

Trump has in recent days sympathized with protesters who turned out by the hundreds in states across the country, flouting the same social distancing guidelines the White House has put in place to stamp out the virus that urge Americans to avoid gatherings of 10 or more people.

The president on Friday threw his support behind protesters in Minnesota, Michigan and Virginia who held demonstrations to oppose stay-at-home orders and other restrictions meant to curb the spread of the virus, calling to “LIBERATE” those states. All three are run by Democratic governors.

Small protests have formed in recent days in Michigan, Ohio, Virginia, Minnesota, Texas and Florida, with others planned for the coming week. Some demonstrators have waved Trump flags or worn apparel bearing the president’s name.

Trump said the protesters he's seen in press coverage are showing a "love of our country."

State leaders have expressed concern that Trump's call for liberation could foment civil unrest and encourage the demonstrations. Public health experts have warned that the large gatherings could further spread the virus, extending the need for social distancing.

The coronavirus has infected more than 755,000 people in the U.S. as of Sunday night, according to Johns Hopkins University data, and killed more than 40,000.

The White House's phased approach to reopening the U.S. economy calls for governors to make the final determination on when they can lift social distancing guidelines. But Trump's continued acceptance of the protests threatens to incite further animosity toward state leaders.

Vice President Pence said during Sunday's briefing that Americans should "heed your state and local authorities."

The president has been adamant about the need to reopen the economy, which has been a central tenet of his reelection campaign. But he insisted on Sunday that the lifting of restrictions would prioritize safety.

"There are a lot of great things happening, and we’re going to start to open our country," he said. "It’s like a beautiful puzzle."