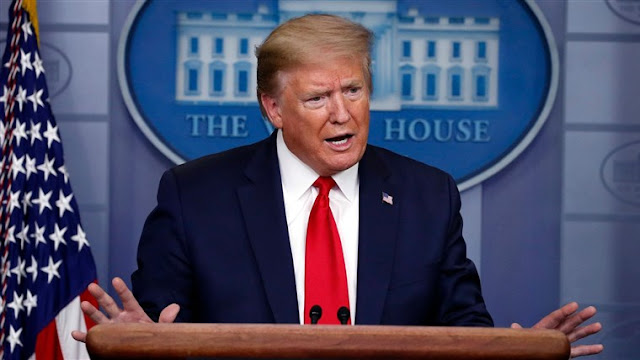 President Trump on Wednesday announced he had signed an executive order that temporarily suspends the issuance of new green cards, a limit on immigration he says will protect American jobs amid the coronavirus pandemic.

“In order to protect our great American workers, I have just signed an executive order temporarily suspending immigration into the United States,” Trump said at a White House briefing Wednesday.

“This will ensure that unemployed Americans of all backgrounds will be first in line for jobs as our economy reopens,” Trump continued. “It will also preserve our health care resources for American patients.”

The order, which was released shortly after Trump’s remarks, applies to those seeking permanent residence in the United States and will last for 60 days, at which point it will be reevaluated and potentially extended. Trump said Wednesday he could change the order during the 60 days.

The order will apply to foreign nationals seeking a green card who are outside the United States at the time of the order, excluding from the suspension those who are in the country seeking to change their immigration status.

That distinction, lawyers say, is important because an order limiting change-of-status applications could upend the lives of legal immigrants in the country, inviting extensive litigation.

It also carves out exceptions for essential workers, including medical personnel, spouses and children of U.S. citizens, members of the Armed Forces, individuals designated by law enforcement, prospective foreign adoptees of U.S. citizens, and prospective "investor visa" users. Trump also noted Tuesday that the order would not apply to seasonal farm workers, who would seek seasonal guest worker visas.

The order includes a provision for the secretaries of Labor and Homeland Security to review nonimmigrant visa programs in consultation with the secretary of State to "recommend to me other measures appropriate to stimulate the United States economy and ensure the prioritization, hiring, and employment of United States workers."

“It could be modified,” Trump told reporters Wednesday. “Right now, we have a very powerful immigration ban, but it may be modified, meaning made tougher or made less tough.”

Trump first said cryptically on Twitter on Monday night that he would sign an order temporarily suspending immigration into the United States, citing “the attack from the Invisible Enemy” and “the need to protect the jobs of our GREAT American Citizens.”

The announcement prompted immediate and widespread questions about the scope and motivation of the order, with critics accusing Trump of using the virus as a guise to advance a long-held agenda of limiting both legal and illegal migration. Heath experts also said such a move would do little to reduce the spread of the virus, given that the U.S. already has significant community spread.

Trump indicated on Wednesday that the primary goal of the order was to blunt the economic damage of the coronavirus, which has forced businesses countrywide to close and lay off workers. Roughly 22 million Americans have filed for unemployment benefits over the last four weeks.

The president has separately banned travel from China, Iran and most of Europe in addition to restricting traffic along the borders with Canada and Mexico in order to blunt the spread of COVID-19, the disease caused by the coronavirus, which had sickened more than 840,000 Americans as of Wednesday evening, according to Johns Hopkins University.

Trump acknowledged Wednesday that his administration is also preparing a second order that he may later sign to further limit immigration but provided no further details on what shape it would take.

The current order is likely to affect a relatively small group of people, given the exemptions included.

Immigrants from Mexico, for instance, tend to get their green cards as family members of U.S. citizens.

In January, the last month before coronavirus-related closures started affecting migration patterns, the State Department granted 5,536 green cards to Mexicans. Out of those, nearly 3,000 were spouses and children of U.S. citizens.

The largest groups of Mexican nationals who would have fallen under the suspension are children and spouses of legal permanent residents and the foreign national parents of U.S. citizen adults.