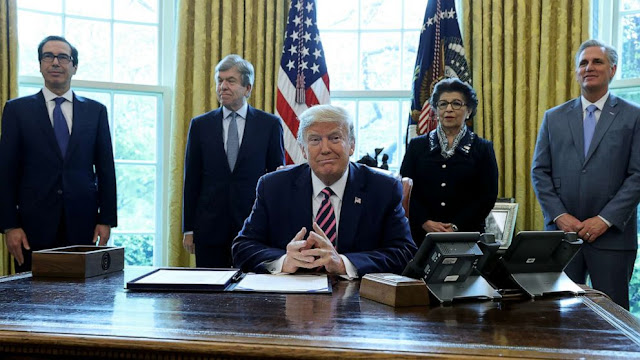 The measure includes an additional $310 billion in funding for the Paycheck Protection Program (PPP), $60 billion of which is reserved for community banks and small lenders; $75 billion for hospitals; $25 billion to support testing efforts; and $60 billion for emergency disaster loans and grants.

Trump signed the legislative package during an Oval Office ceremony.

The legislation came out of several days of negotiations between Treasury Secretary Steven Mnuchin and congressional Democrats. The Senate passed the bill in a voice vote on Tuesday, with the House following suit on Thursday in a 388-5-1 vote that saw lawmakers wearing masks and voting in groups after Republicans demanded a floor vote.

“I want to thank Congress for answering my call to pass this critical funding,” Trump said Friday in the Oval Office. He said the more than $300 billion to replenish the PPP would help “keep millions of Americans on the payroll.”

“Great for small businesses, great for the workers,” Trump said.

Trump had urged Congress to swiftly pass legislation replenishing funds for the PPP, which ran out of money last week in the absence of a deal on additional funding. Negotiators wrangled over several days to hash out a deal, reaching one Tuesday that the Senate approved hours later.

Democrats successfully pushed for more funding for hospitals and testing, but the final package did not include additional funding they sought to help states combat the novel coronavirus outbreak.

The PPP, established by the $2.2 trillion CARES Act that Trump signed into law on March 27, is designed to help small businesses hurt by the coronavirus, which has forced establishments across the country to close, leading to massive layoffs.

Over 4.4 million new Americans filed for unemployment insurance last week, according to Labor Department data released Thursday, bringing the total to 26 million who have applied for jobless benefits since businesses began laying off employees in March.

Still, the rollout of the loan program was beset by problems, as some big businesses like restaurant chains and hotels were able to tap into the funds. Some companies have returned funds under pressure and the Treasury Department on Thursday rolled out new guidelines that advised publicly-traded companies against applying for the emergency loans.

Trump’s signing of the new legislation comes as Washington policymakers are already debating what a fourth coronavirus relief package would look like.

However, Senate Majority Leader Mitch McConnell (R-Ky.) signaled Wednesday that the next package would likely not be approved until May, when lawmakers return to Washington, and pointed to the need to pay attention to the national debt.