Trump says he has authority on opening state economies, not governors 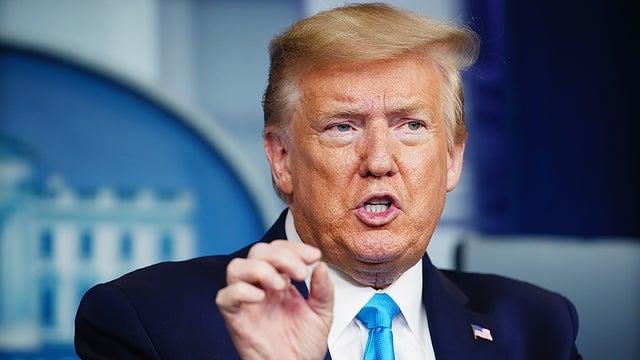 President Trump on Monday claimed that he, not state governors, has the ultimate authority to loosen restrictions on states as the coronavirus outbreak eases, an assertion disputed by legal experts.

“For the purpose of creating conflict and confusion, some in the Fake News Media are saying that it is the Governors decision to open up the states, not that of the President of the United States & the Federal Government. Let it be fully understood that this is incorrect,” Trump tweeted Monday morning.

“It is the decision of the President, and for many good reasons. With that being said, the Administration and I are working closely with the Governors, and this will continue,” Trump continued. “A decision by me, in conjunction with the Governors and input from others, will be made shortly!”

However, legal experts said that, while Trump can issue federal regulations to prevent the spread of diseases, he does not have the authority to reverse a public health restriction put in place at the state or local level.

“The president can issue reasonable necessary federal-level quarantine orders,” said Elie Honig, a legal analyst and former federal prosecutor in New York. “I don’t see any mechanism or constitutional principle that would apply here that would allow the president to come in and overrule the governors.”

States across the country have implemented strict measures like stay-at-home orders and nonessential business closures as a way of preventing the spread of COVID-19, which had sickened over half a million people in the United States as of Monday.

The White House has recommended Americans avoid restaurants and nonessential travel and keep in-person gatherings to 10 people or less until April 30.

The pandemic has sparked business closures and massive layoffs, with unemployment claims nearing a total 17 million in just three weeks.

Eager to lessen the economic damage caused by the mass closures, Trump is currently considering whether and when to loosen the federal guidelines in areas of the country that haven’t seen significant spread of the virus. The president is expected to announce a new council of business and medical leaders focused on reopening the economy this week.

But while Trump has the clear authority to rescind or change federal health guidelines, state and local officials do not need to follow the federal government’s orders, legal experts say. As a result, state and local jurisdictions could continue to recommend more stringent restrictions even if the president seeks to loosen them.

Trump has largely avoided telling states what measures to put in place in order to stop the spread of the coronavirus, leaving it up to governors to make decisions for their respective states.

Asked whether he agreed with Florida Gov. Ron DeSantis’s (R) decision against ruling out reopening schools next month, Trump said he would rather have governors make their own decisions but maintained that he has the right to “overrule” them.

“I like to allow governors to make decisions without overruling them, because from a constitutional standpoint, that's the way it should be done. If I disagreed, I would overrule a governor, and I have that right to do it. But I'd rather have them — you can call it ‘federalist,’ you can call it ‘the Constitution,’ but I call it ‘the Constitution.’  I would rather have them make their decisions,” Trump told reporters at a White House briefing Friday.