Trump administration laying groundwork for May reopening of U.S. economy 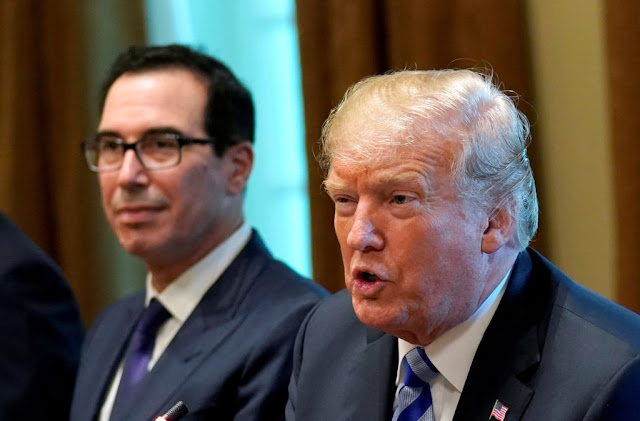 The Trump administration is laying the foundation to push for a reopening of parts of the U.S. economy as early as the beginning of May amid rising pressure over unemployment numbers rivaling those during the Great Depression.

President Trump and top government officials in recent days have talked about seeing “glimmers of hope” and “light at the end of the tunnel” while publicly discussing ideas for how to revive the economy.

The president has floated reopening businesses in parts of the country that do not have outbreaks. The Center for Disease Control and Prevention (CDC) on Wednesday unveiled guidelines meant to encourage those in critical sectors who have been exposed to the coronavirus but aren’t showing symptoms to continue working.

Treasury Secretary Steven Mnuchin told CNBC on Thursday that he believes companies could reopen in May as long as Trump “feels comfortable with the medical issues.”

But even with an aggressive approach and optimistic outlook, the decision to reopen the economy may largely be out of the federal government’s hands.

Many governors have imposed strict measures to try to stamp out the virus, with some stay-at-home orders in place through the end of May or later, and public health experts warned that without significantly expanded testing and contact tracing capabilities, reopening the economy too soon could trigger a new wave of infections and death.

Officials have resisted putting a date on an economic reopening after Trump was widely criticized for floating Easter Sunday, April 12, as an initial target.

The peak in domestic cases is expected on April 11, according to a model produced by Christopher Murray of the Institute for Health Metrics and Evaluation at the University of Washington that the White House has been closely tracking.

But the White House has grown increasingly optimistic that the roughest period will soon pass. Anthony Fauci and Deborah Birx, key health officials on the coronavirus task force, have pointed to signs that social distancing guidelines are working and the projected death count domestically has declined from between 100,000 and 200,000 to about 60,000. Still, the model the White House has been relying on assumes that social distancing continues through May.

“We are hoping with cautious optimism that at the same time we’re in for a bad week, we’re going to start to see a turnaround,” Fauci said on NBC’s “Today” on Thursday.

The president said Wednesday he would “rely very heavily” on the advice of health experts when considering how and when to reopen the country. Those officials have repeatedly cautioned against acting too soon or setting a timeline that isn’t dictated by the virus, warning that doing so could undermine the progress of the past few weeks.

Trump has spoken broadly about how he’d like to see the economy reopen, either all at once with a “big bang,” or more realistically in phases depending on where the virus is most prevalent. The strength of the economy has long been the central argument for Trump’s reelection bid, providing an extra incentive for him to act swiftly.

Officials expect the White House to form a second, smaller coronavirus task force that would be dedicated to mapping out how to reopen the economy. The Washington Post reported that members could include Mnuchin, White House chief of staff Mark Meadows and private sector figures.

One former administration official bemoaned that there are already “too many cooks in the kitchen” without a clear leadership structure for combating the virus. But the official, who requested anonymity to speak candidly, acknowledged that a planning cell is needed to consider the many complexities that would go into how to reopen the economy.

“I don’t think they’ve developed a plan to reopen things,” the official said. “What areas can go first? What happens with restaurants? How many people can you have, how many tables?

“They need to decide what the best benchmark is, and they haven’t.”

Top administration officials have signaled support among Trump’s inner circle for a return to normal life and business operations in some capacity soon after the guidelines expire.

Attorney General William Barr told Fox News’s Laura Ingraham on Wednesday evening that the government should consider “alternative ways” of protecting people after the 30 day period ends, and he described the current measures in place across the country as “draconian.”

“I think when this period of time at the end of April expires, I think we have to allow people to adapt more than we have,” Barr said. “Not just tell people to go home and hide under the bed but allow them to use other ways, social distancing and other means, to protect themselves.”

White House economic adviser Larry Kudlow told Fox Business on Thursday afternoon that he was hopeful the economy would be reopened in four to eight weeks, which would be between early May and the beginning of June.

Some outside the administration have encouraged Trump to implement a plan to open up certain sections of the country by the start of May to stave off severe economic depression.

“May 1 has to be a hard deadline for getting things open and running,” said Stephen Moore, an economist and former Trump campaign adviser, who advocated for reopening parts of the country on a rolling basis, beginning with less impacted areas. “There has to be a calibration of the best medical advice plus the best economic advice.”

Fauci and other health experts have said the key to returning to a sense of normalcy would be expanded testing and contact tracing beyond current capabilities that would allow officials to quickly identify and isolate potential new clusters.

Trump has conceded in recent weeks that it is up to states to determine whether or not they go on lock down to prevent the spread of the virus, and he may be forced to do the same when considering who is in charge of lifting those restrictions.

Leaders in economic hubs such as California, New York, Illinois, Michigan and Ohio have issued stay-at-home orders and shuttered nonessential businesses, with officials there signaling the measures could be in place well into May or June.

And even if governments begin reopening restaurants, entertainment venues, shopping centers and public spaces next month, some Americans may be reluctant to venture out until it’s clear the virus has subsided and there are therapies or a vaccine available to safeguard against it.

“It’s the confidence point of when are people going to feel confident to go back to work, to go back and consume, in particular, services,” said Stephanie Segal, a former Treasury Department official who now works at the Center for Strategic and International Studies.

“It’s not … an on-off switch,” she said. “There’s going to be a transition, but I think that transition is going to depend on the kind of science- and health-led points that allow us to make a transition back.”