Texas tells locals they must delay their upcoming May elections 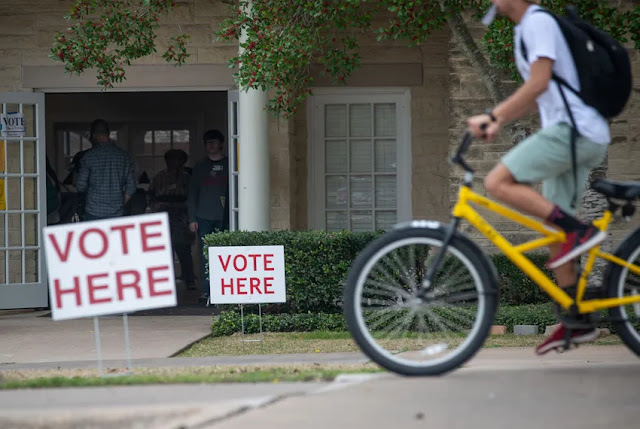 Citing the state’s stay-at-home order, the Texas secretary of state is instructing municipalities to delay their May 2 elections.

In an email to local election officials sent Thursday afternoon, the state’s director of elections, Keith Ingram, said cities, towns and school boards that hadn’t pushed their upcoming elections to November “must take action to do so immediately” or risk facing a challenge in court.

“If you don’t move your May 2nd election, you are subjecting voters to health risks and potential criminal violations,” Ingram wrote. “Failure to postpone your election will put your election at severe risk for an election contest.”

In response to the new coronavirus pandemic, Gov. Greg Abbott paved the way for postponements two weeks ago with an emergency proclamation suspending parts of the state's election code. Since then, municipalities and other local entities across most of Texas had voted to cancel their traditional early May elections.

But a handful of towns and special districts were still planning to go ahead with their May votes even as many county election officials told locals they wouldn’t run the elections. Some city councils cited a state constitutional requirement to fill some vacancies within 120 days. Others feared the measures on the May ballot would get lost at the bottom of a robust November general election ballot.

Abbott issued an executive order Tuesday telling Texans to stay at home for the next month unless they are taking part in essential services and activities. In announcing his order, the governor made clear he expects all Texans to adhere to the guidance or face criminal punishment. The order lasts until April 30. Early voting for municipal elections would have started before then.

Although election workers are included under the federal government’s guidance on essential workers, that would not include voters, Ingram said.

The secretary of state’s office also indicated Thursday that it was assessing how the coronavirus pandemic could affect future elections, including an increase in voting by mail.

In an advisory also sent to local election officials Thursday, state officials signaled that the state’s voting-by-mail qualifications could extend to voters affected by the pandemic.

Voting by mail is fairly limited in the state, and Texans seeking the absentee voting option must offer an excuse to qualify. To be eligible under typical circumstances, a voter has to be 65 years or older, have a disability or illness, be out of the county during the election period, or be confined in jail.

In the advisory, officials noted the Texas election code qualifies voters as having a disability if they have a “sickness or physical condition” that prevents them from appearing to vote in person without the likelihood of “injuring the voter’s health.”

Pointing to that provision, the Texas Democratic Party recently asked a state district judge to declare that it would apply to any voter in Texas "if they believe they should practice social distancing in order to hinder" the spread of the new coronavirus.

State election officials also advised locals to review whether they could meet an increased demand for voting-by-mail requests for the 2020 election and to consider whether they should seek court orders to modify in-person voting procedures to accommodate quarantined voters.

“Please be advised that this is the first of several advisories we plan to issue regarding election implications of COVID-19,” Christina Worrell Adkins, legal director of state’s elections division, wrote to locals. “We have spoken to a number of election officials about this topic, and we plan on continuing these discussions as we work to develop more specific guidelines.