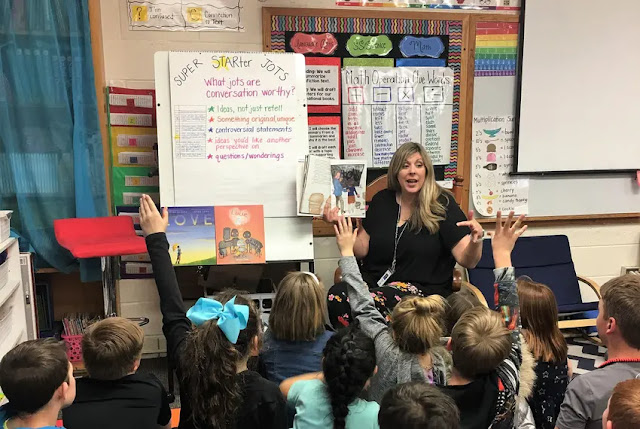 Around this time of the school year, Karen Sams expects to be in the “sweet spot” with her 17 third graders — the point at which, after months of watching them closely, she knows their quirks and understands how to motivate them.

Sams used to greet every child at the classroom door, giving each the choice of a hug, high five, fist bump or dance before they walked inside — a ritual expected of all teachers at Crockett Elementary School in Weatherford Independent School District, outside of Fort Worth, where she has spent four of her 16 years as a teacher.

She used the time together in her colorfully decorated classroom to build community among her students. On “make-it-happen Mondays,” they each talk about what their goals are for the week. On “wonderful friend Wednesdays,” the class picks one student and takes turns saying nice things about them.

“It adds another layer to our classroom community because each kid is celebrated and loved,” she said.

But with Weatherford schools temporarily closed by the coronavirus pandemic, Sams has lost the opportunities that face-to-face instruction yield. Soon, she will start video chatting with her students regularly, seeing an incomplete class in an array of small boxes on a screen. “You don’t get those warm, fuzzy feelings you do in person. It’s hard to feel someone’s energy or know their tone or feel that hug,” she said.

Switching to entirely virtual classrooms has been emotionally and logistically challenging for Sams and thousands of other teachers who rely on hugs, body language and routine to connect with students, especially those who may lack support and stability at home.

Eighth grade Ysleta ISD math teacher Michelle Sandoval also misses the “teachable moments” that come from in-person relationships with students. At school, she’s advised students on what lipstick to wear to their quinceañeras or how to wear a tie on themed school days. Those moments help her build trust for the tougher educational lessons. Sandoval and Sams, both named 2020 Teachers of the Year by the Texas Association of School Administrators, are experts in their field facing one of their hardest challenges yet.

The teachers know that some of their students will emerge from the pandemic shutdowns largely unscathed, but many already seem to be slipping away. Some may not have access to regular meals or medical attention away from the school building. Others aren’t engaging in online classes. Some are just missing.

Even more so than during the regular year, the coronavirus pandemic is forcing teachers to become social workers and counselors for their students, lifelines to keep them from slipping through the cracks. For some kids, their teachers’ support won’t be enough.

Sams hasn’t seen her students in person since March 13, when she hurriedly stuffed workbooks and school supplies in their backpacks after finding out last minute that Weatherford ISD would be extending its spring break two weeks.

She’s tried to keep in touch with all of them since, but there are two third graders she hasn’t been able to reach at all, although she has called a long list of family members trying to track them down.

Many families who attend Sams’ school, where about half of the students are economically disadvantaged, live in trailers or rural areas where they can’t easily access the internet. Many parents are working in the health care field or other essential jobs, and they struggle to figure out where to leave their little ones.

“I worry about my most vulnerable students who may not have a safe and secure environment at home, and they get their love and structure from school. Those are the parents I haven’t heard from and can’t get a hold of,” she said. “I stay up at night worrying about those kids the most.”

More than 500 miles away from Sams, in El Paso, Sandoval has used video conferencing to check in on her students’ health and safety. If she notices a student living in a house with broken windows or wearing the same clothing days in a row, she will call a counselor who can get them help.

“I’ve had kids openly tell me, ‘Both of my parents lost their jobs and we’re struggling,’” she said. “I’ve had the counselors call and offer them groceries. Some of the parents have broken down in gratitude and said, ‘I was too afraid to ask for help myself.’”

Of about 132 students she teaches in six classes at Parkland Pre-Engineering Middle School, where the vast majority of students are economically disadvantaged, Sandoval has made contact with about 90%. Those she can’t contact might be busy taking care of siblings or working to help support their families.

Five of her students live in low-income neighborhoods in Ciudad Juárez, Mexico, across the border, 20 miles from the district. During the school year, they would wake up at 4 a.m., hop in the car with an uncle or another relative, and cross the border to get to school, often returning home at 8 or 9 p.m.

“Those are the students I can’t reach … because they don’t have a working telephone,” she said. “I can reach the family members, but the children are in Juárez right now. … Some nights I get emotional. I can sometimes cry or worry about my students that they are in a safe environment and get what they need.”

And more than a quarter of the students who responded to Sandoval told her they didn’t have internet access, limiting her efforts at regular outreach. Those students were given the opportunity to pick up academic packets from the school, but she isn’t sure if all of them have.

Two Fridays ago, Sandoval sent a video conference invite to 127 students, and 70 showed up for a “chaotic” but “fun” meetup. “It kind of looked like “The Brady Bunch,” where everyone’s looking at each other and making fun of each other’s hair and all of that,” she said.

She started off her first lesson by having students submit a 30-second video about how they were doing. Almost all of the eighth graders, even the “tough kids,” said they missed school, prompting tears of gratitude from Sandoval. She is not giving out many new math lessons right now, following a districtwide message, worried about widening the academic gap between students who have more and those who have nothing. But she is making sure the lessons she does give out are engaging, flexible and memorable for students who have a lot more on their minds than algebra functions.

Sometimes, Sandoval is helping her students through math problems on video while also answering her questions from her 7-year-old first grader, Gabriel, as he sits at the table next to her. “I don’t want to put him second,” she said.

Sams is mother to a third grader and a pre-K student, who are unimpressed by her Teacher of the Year accolade and uninterested in following her home-schooling instructions and lesson plans. Her husband is an assistant principal of an intermediate school in a neighboring district and is also hard at work.

But her personal struggles have allowed her to understand her students and their parents better. Right now, about half of her students are engaged and responding with completed activities. Parents reached out to her who were also having trouble home-schooling to say their students responded when they heard Sams’ voice on video telling them to complete their assignments.

“It was like turning a light switch: ‘I got to do it because Ms. Sams said to do it,’” she said. “Hopefully … students will be more engaged because it’s coming from their teacher and not their home-school parent.”