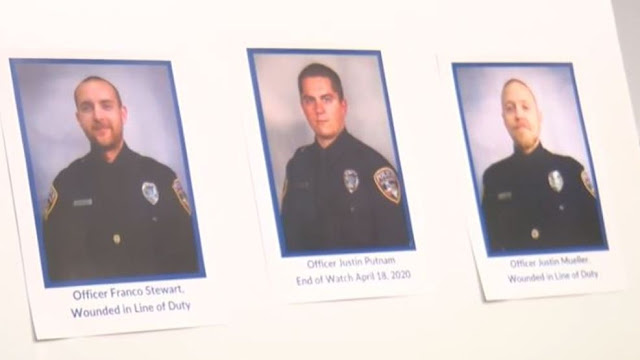 The officer, Justin Putnam, 31, died on-scene. Two officers accompanying him, Justin Mueller and Franco Stewart, were also shot and are in critical but stable condition at Ascension Seton Hays Hospital, according to the publication. The alleged killer died of a self-inflicted gunshot wound.

"We lost a fine young man, a faithful officer and a friend last night," interim Police Chief Bob Klett said at a news conference Sunday morning, according to My San Antonio. “We ask the community for its prayers and support. We're certainly going to need it."

Klett said that police were called to an apartment complex about 6:00 p.m., with the 911 call reporting Alfred Perez de la Cruz had assaulted his wife and three other people, also possible in danger, were inside the apartment.

"As they entered, he ambushed them. He was prepared, ready for them to come in and started shooting immediately," Klett said, telling reporters that all three officers and de la Cruz were wearing body armor at the time of the shooting. "There was nothing they could do to escape the gunfire."

Putnam was a five-and-a-half-year veteran of the force, according to Klett.

“I ask all Texans to join Cecilia and me in praying for the officer killed and for those injured, and for the continued safety of all law enforcement officers who protect our communities,” Gov. Greg Abbott (R) wrote in a statement.