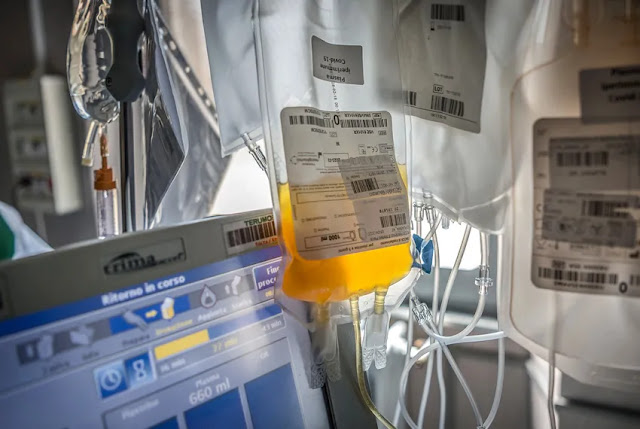 With no vaccine for COVID-19 expected for months and cases increasing daily, doctors in Texas and around the country are experimenting with a new treatment based on an old technique — but they aren’t sure if it will be effective.

The treatment injects antibody-rich plasma from people who have recovered from the novel coronavirus into people who have severe cases of COVID-19, the disease caused by the virus. Antibodies are proteins in blood that fight specific bacteria and viruses.

In the absence of a vaccine, doctors and scientists are looking to so-called convalescent plasma because they consider it low risk and because it has been effective during past epidemics.

Now they have to find out if it works against the new strain of coronavirus.

On March 27, the Journal of the American Medical Association published an article about five critically ill patients with COVID-19 in Shenzen, China, all of whom improved after receiving convalescent plasma transfusions. Another study of 10 patients in Wuhan, China, reported that all symptoms disappeared or significantly improved within one to three days of a plasma transfusion.

Researchers plan to find out if that success can be replicated with COVID-19 patients in the U.S.

“Vaccines for broad use would take about 12-18 months, and we don't have time to wait,” said Lola Adepoju, a health services researcher at the University of Houston College of Medicine. “In the meantime while those vaccines are being developed, what can we do? [Convalescent plasma] therapy definitely is one of those things we can actually pursue.”

The Food and Drug Administration has yet to approve the treatment but is allowing initial clinical trials. Because those trials are limited, doctors nationally can also request the FDA’s permission to use the treatment for severe COVID-19 cases.

Last week, the FDA tapped the Mayo Clinic to lead and coordinate the effort and evaluate the treatment’s effectiveness.

Since then, hospital systems around the nation have registered through the Mayo Clinic to start treating patients with convalescent plasma. Texas hospitals that plan to try the treatment include Methodist Hospital Stone Oak in San Antonio, University of Texas Southwestern Medical Center in Dallas and the Baylor College of Medicine in Houston.

Five patients at Baylor St. Luke’s Medical Center in Houston — part of the Baylor College of Medicine — have been treated with convalescent plasma, said Dr. Ashok Balasubramanyam, vice president of academic integration and associate dean of academic affairs at the Baylor College of Medicine. The school has also been authorized to conduct a clinical trial, expected to start within a couple of weeks.

On Thursday, a patient in Austin received a convalescent plasma infusion, the first in the city, said Dr. Jeff Yorio, a hematologist and oncologist at Texas Oncology who helped get the program started in Austin.

“Of course we all want to be very hopeful about a treatment like this,” Yorio said. “But at the same time, we don't truly know how effective it’s going to be compared to other types of things we're already doing.”

Yorio said the program has identified at least five other Austin patients with severe or life-threatening cases of COVID-19 whom doctors want to treat with plasma. The FDA has approved patients within hours of receiving a request, he added.

“We're identifying the absolute sickest patients first,” Yorio said. “If we're able to get more plasma out there that's available, then maybe we'd be able to expand that further to other patients.”

The plasma came from Austin’s blood bank, We Are Blood, which has connected with more than 20 potential plasma donors who have recovered from COVID-19 — and that number should grow as word about the program gets out, said Nick Canedo, a spokesman for We Are Blood.

Donors for convalescent plasma must have received a lab-confirmed positive test for the coronavirus or test positive for COVID-19 antibodies after recovery and be symptom-free for at least 28 days before donating, Canedo said, adding that many potential donors have been unable to get tested for the coronavirus because their symptoms weren’t severe enough to qualify for one.

Someone who initially tests positive and then has a second test for the coronavirus that comes back negative can donate after being symptom-free for 14 days, Canedo said.

Plasma recipients must be of the same blood type group as the donor.

This is not the first time physicians have used plasma to combat infectious diseases before a vaccine is developed. The technique was used to treat hemorrhagic fever in 1979 and the Spanish influenza in 1918, Adepoju said, and it helped reduce mortality in both epidemics. But when convalescent plasma was used to treat Ebola in 2014 in Guinea, Sierra Leone and Liberia, research didn’t find it to be effective.

“The use of convalescent plasma has been studied in prior outbreaks with other respiratory tract infections,” said Dr. LeChauncy Woodard, a general internist and professor at the UH College of Medicine. “There were promising results. That speaks to the likelihood of some promising results of using convalescent plasma in patients who have COVID-19.”

With the FDA’s blessing, doctors have also been trying to treat COVID-19 patients with hydroxychloroquine, a drug typically used to treat malaria and lupus that has shown — in limited research — potential to speed recovery. But it comes with risks: Administered in high doses, the drug can cause heart arrhythmia and cardiac arrest, said Dr. Kristin Mondy, chief of the division of infectious disease at the University of Texas at Austin’s Dell Medical School.

A plasma treatment is similar to a blood transfusion and carries similar risks, Mondy said, such as allergic reactions or acute lung injury caused by fluid overload.

“We need bigger studies to really know if it’s going to make a significant impact,” Mondy said. “It seems to at least be pretty safe, and since we don’t have a good therapy at this time, that’s why we’re looking to this.”