Students in Japan use robots as stand-ins for graduation ceremony 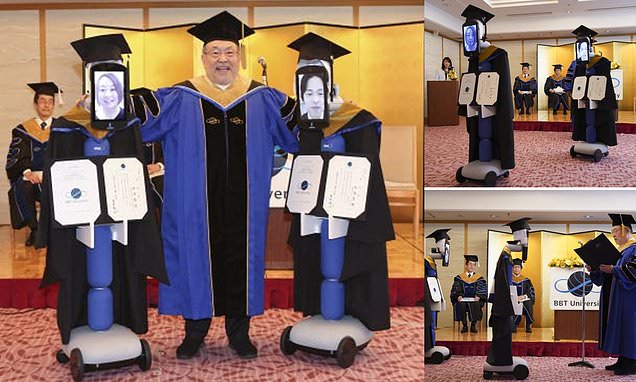 Students at a Japanese university used robotic stand-ins for a graduation ceremony as the coronavirus outbreak has forced governments to forbid large gatherings.

Video obtained by Reuters shows life-sized robots dressed in caps and gowns and bearing tablets broadcasting the live faces of a students who are controlling the device from home. The robots allow the students to take part in the ceremony and get cheered on by teachers and university faculty on their momentous day.

The ceremony reportedly took place at the Business Breakthrough University in Tokyo with the help of “Newme” robots created by developer ANA Holdings, according to Reuters. One student told the news service that it was a "novel" way to receive a degree while traditional graduation ceremonies were impossible.

“I think this is truly a novel experience to receive a certificate in a public area while I am in a private space,” Kazuki Tamura told Reuters.

Japan has recorded more than 3,900 cases of the disease, and less than 100 deaths. Prime Minister Shinzo Abe declared a state of emergency on Tuesday for parts of the country as health officials continue to battle the virus's spread.