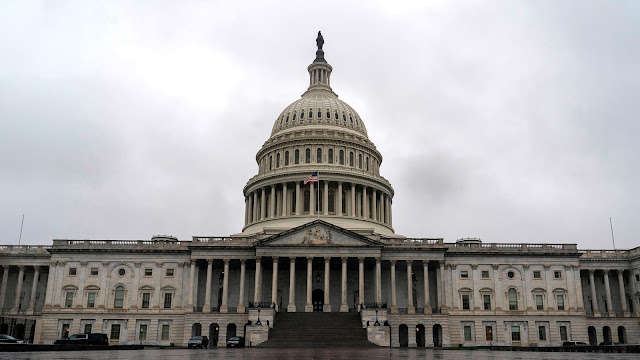 The Senate on Tuesday approved roughly $484 billion in new coronavirus aid for small businesses and hospitals and more funding for testing, ending a lengthy battle over the size and contents of the package.

The agreement was passed by a voice vote after days of negotiations between congressional Democrats and Treasury Secretary Steven Mnuchin, with the talks lasting until approximately midnight on both Sunday and Monday.

The deal includes an additional $310 billion for the Paycheck Protection Program, including $60 billion specifically for community banks and smaller lenders, as well as $75 billion for hospitals, $25 billion for testing and $60 billion for emergency disaster loans and grants, according to a summary obtained by The Hill.

Lawmakers are under pressure to act quickly as the coronavirus decimates large sectors of the economy where businesses have either scaled back or closer altogether.

Forty-three percent of respondents to a Pew Research Center survey released Tuesday said they had either had their wages cut or lost their job due to the coronavirus pandemic.

The Senate’s passage came only hours after a senior administration official confirmed the agreement had been reached, and less than two hours after text of the bill began to circulate as leadership tried to “hotline” the deal to find out if it could pass it by consent, which would allow them to avoid bringing back members amid health concerns sparked by the coronavirus.

The House is expected to pass the bill on Thursday morning, with members returning to Washington for a recorded vote. President Trump threw his support behind the deal on Tuesday, an endorsement that could help help the agreement avoid landmines from libertarian-minded lawmakers and fiscal conservatives.

“I urge the Senate and House to pass the Paycheck Protection Program and Health Care Enhancement Act with additional funding for PPP, Hospitals, and Testing,” Trump tweeted.

He added that once the bill is signed he will start discussions on the “phase four” coronavirus bill including more help for states and local governments, infrastructure, “tax incentives” and a payroll tax cut. Both chambers are expected to be out of Washington until at least May 4.

Congress faced calls to quickly replenish the Paycheck Protection Program (PPP) funds after the initial $349 billion appropriated during last month’s $2.2 trillion coronavirus stimulus package ran out late last week amid high levels of interest from businesses and independent contractors that have been hit hard by the coronavirus.

McConnell took a victory lap on Tuesday, arguing that Democrats had dropped “a number of their unrelated demands” during the negotiations.

“Democratic leaders blocked the money and spent days trying to negotiate extraneous issues that were never on the table. I am grateful our colleagues have walked away from those demands and will finally let Congress act,” he said in a statement.

But Democrats argued that hospitals, many of whom have seen a drop in revenue as they’ve sidelined elective surgeries, and states, needed additional funding. They also wanted to reform the Paycheck Protection Program to earmark funding specifically for smaller lenders.

The roll out of the small business program was beset by mishaps including an overwhelmed Small Business Administration (SBA) system, banks adding additional regulations onto the applications and confusion about who was eligible for the funding, which was meant to provide loans and grants to businesses with fewer than 500 companies.

Lawmakers have fumed this week amid reports that chain restaurants were able to get tens of millions in loans under the program. Shake Shack, which received a $10 million loan, announced that it would return the funding amid the backlash.

Sen. Marco Rubio (R-Fla.), who chairs the Senate’s small business committee, pledged that he would subpoena uncooperative companies as part of oversight he’ll do later this year.

"This fall, the Senate Committee on Small Business and Entrepreneurship will conduct aggressive oversight into the use of the PPP. If companies are not forthcoming, the Committee will use its subpoena power to compel cooperation," Rubio said.

Democrats also homed in on getting more money for testing. Public health experts warn that ramped up, widely available testing is crucial before social distancing restrictions, put in place to try to curb the spread of the virus, are lifted.

Democrats offered their own plan to provide $30 billion for testing and the creation of a nationwide strategy.

The deal passed by the Senate includes $25 billion to “research, develop, validate, manufacture, purchase, administer, and expand capacity” for tests.

It also requires states to come up with a plan for how to test for and mitigate the spread of the coronavirus, as well as a national strategy from the administration on assisting states.