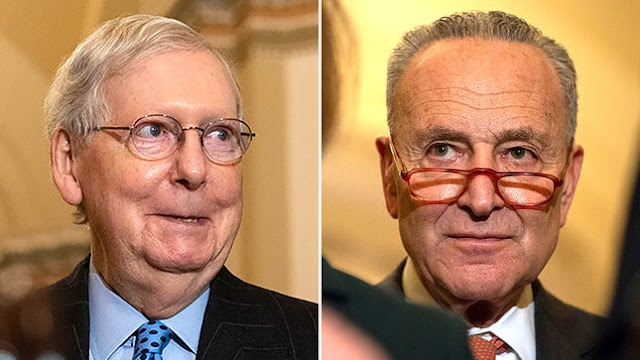 Senate leadership is moving quickly to approve additional aid for small businesses, which have been hard hit by the coronavirus outbreak, after a rocky rollout last week of the program aimed at helping them.

"Congress needs to act with speed and total focus to provide more money for this uncontroversial bipartisan program. I will work with Secretary Mnuchin and Leader Schumer and hope to approve further funding for the Paycheck Protection Program by unanimous consent or voice vote during the next scheduled Senate session on Thursday," McConnell said in a statement.

A spokesman for Senate Minority Leader Charles Schumer (D-N.Y.) said the Senate Democratic leader "has not heard from" McConnell, and that Sen. Ben Cardin (D-Md.), the top Democrat on the small business committee, has not heard from Sen. Marco Rubio (R-Fla.), the committee chairman.

"[McConnell] is working with @SenSchumer & hopes to approve additional funding by voice vote during the Senate’s pro forma session this week," he tweeted.

Congress included $350 billion in potentially forgivable small business loans in the $2.2 trillion coronavirus stimulus package that passed late last month. The Paycheck Protection Program provides loans for businesses with up to 500 employees. Funding could be turned into a grant, meaning it wouldn't have to be repaid, if it's used for expenses like payroll and rent and the business retains its employees.

The roll out of the program was rife with stumbling blocks, including confusion about the requirements for applying for the federal aid and a surge in applications that threatened to overwhelm the system.

Bank of America said Monday it had received more than 178,000 applications worth almost $33 billion, which is about 9.4 percent of the total available in the program.

The high level of interest has prompted chatter within the administration and lawmakers about needing to quickly approve more funding.

Senators are currently dispersed across the country as part of a three-week recess. But the Senate is scheduled to hold a brief session on Thursday, where a single senator could try to pass the additional small business funding. Under the Senate's rules any one senator could object to the additional money passing by unanimous consent. It wasn't immediately clear if a member would return to Washington to block the new funding.

The Treasury Department is expected to request an additional $200 billion, sources told The Washington Post. A Treasury spokesperson didn't immediately respond to a request for comment about the figure.

But Rubio said in a tweet that the program would need between an additional $200 billion to $250 billion.

"Have asked @USTreasury⁩ to make formal request for more money for #PPP today. Program still having some problems,but steadily improving. This trend will continue & at current pace funds could exhaust MUCH SOONER than anyone anticipated," he said.

If the funding passes the Senate on Thursday, it would still need to clear the House. Minority Leader Kevin McCarthy (R-Calif.) said on Tuesday that he's discussed the Treasury's forthcoming request with Mnuchin.

"I support the Secretary's request and following the Senate's approval, the House should move swiftly to do the same and provide confidence to small businesses," he said in a statement.