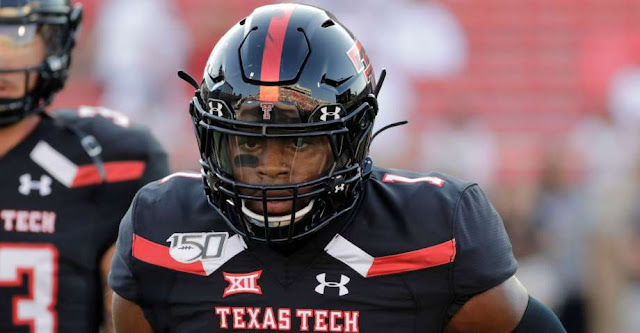 Texas Tech linebacker Jordyn Brooks is set to continue his football career professionally as the Seattle Seahawks selected him with the 27th overall pick in the 2020 NFL Draft on Thursday.

As there was not much buzz around him before the start of the 2019 football season, Brooks had a season to remember, proving to be one of the top linebackers in the country. Not only did he have the best season of his career, but he also broke several program records with the guidance of a new coaching staff.

Last season, Brooks started in all 11 games he appeared in, missing one game due to an injury that sidelined the senior for about a month. Despite battling an injury, Brooks finished the season with 108 total tackles, the most since Micah Awe in 2015. Along with his total tackles, Brooks recorded 20 tackles for loss, marking the most in program history since Adell Duckett set the school record in 2003. This ranked him third in the program record books for tackles for loss in a single season.

Brooks’ 2019 campaign was highlighted by an unforgettable game against Oklahoma State on Oct. 15 at Jones AT&T Stadium. Against the Cowboys, Brooks recorded 19 tackles, four tackles for loss, three sacks, a forced fumble and a quarterback hurry. With Brooks anchoring the defense, the Red Raiders defeated the ranked Cowboys 45-35 to improve to 3-0 at home to start the season.

After finishing his senior season as a Red Raider, Brooks garnered several awards and honors for his performance. Brooks was named a second-team All-American by the Associated Press, the Walter Camp Foundation, the Football Writers Association of America, the American Football Coaches Association, The Athletic and Pro Football Focus. He was also named Texas’ Defensive Player of the Year by Dave Campbell’s Texas Football Magazine. He was also selected to the All-Big 12 first team. Regarding awards, Brooks was named a finalist for the Butkus Award, a semifinalist for the Chuck Bednarik Award and a preseason candidate for the Bronko Nagurski Trophy. Due to an injury, Brooks was not able to play in the Reese’s Senior Bowl despite being selected.

As Brooks will leave Lubbock for a shot at making a name for himself in the NFL, he left his mark at Tech after having a career to put him in the record books. In his four years at Tech, Brooks recorded 367 total tackles, 220 solo tackles, 33 tackles for loss, seven sacks, nine pass deflections, three fumble recoveries, two forced fumbles and two interceptions. Brooks’ 367 career tackles marked him seventh in program history in the category.

Brooks will look to get his shot at playing in his first NFL game as the Seahawks are set to start their regular season against the San Francisco 49ers in California. The date and time of the game have not yet been announced.