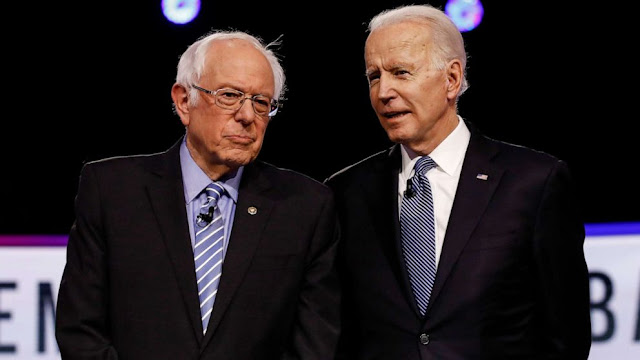 "We need you in the White House. I will do all that I can to see that that happens, Joe," Sanders told Biden during the former vice president's virtual event on the coronavirus.

The endorsement, which comes less than a week after Sanders suspended his own White House bid, marks an attempt to unify the progressive and moderate wings of the Democratic Party. The move is also aimed at quelling concerns that the party won't be able to come together ahead of the general election in November.

Sanders did not endorse the 2016 Democratic nominee, Hillary Clinton, until roughly two weeks before the party's convention in July.

Sanders and his supporters, who regarded the senator's presidential campaign as a movement, have been skeptical of the party establishment, pointing to the reluctance of Democratic leaders to support progressive measures like "Medicare for All."

Biden and more moderate Democrats, in turn, have instead focused on strengthening and expanding the 2010 Affordable Care Act, also known as ObamaCare.

Biden and Sanders acknowledged their policy differences at Monday's event while also highlighting their shared goal of defeating President Trump on Election Day.

"I think that your endorsement means a great deal. It means a great deal to me. I think people are going to be surprised that we are apart on some issues but we're awfully close," Biden told Sanders. "I'm going to need you, not just to win the campaign, but to govern."