Protest at the state Capitol grounds in Austin 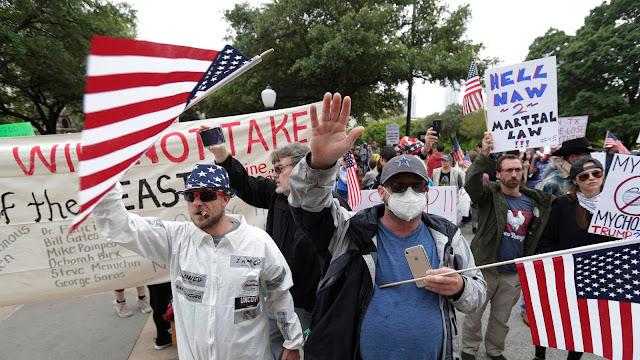 A group of Texans protested at the Texas state Capitol in Austin on Saturday for a “You Can’t Close America” rally as demonstrators across the country rallied against stay-at-home orders and other social distancing measures amid the coronavirus pandemic.

The protesters violated state and local stay-at-home orders to hold the event, echoing rallies that took place earlier this week in Ohio, Michigan, Minnesota and elsewhere.

The Texas Department of Public Safety, which oversees security on state Capitol grounds, urged the public to comply with the orders and other recommendations issued by federal health officials to avoid large gatherings during the pandemic.

“Our officers will take appropriate enforcement action — as with any other protest — should the situation warrant such action,” the agency said in a statement to The New York Times, which was the first to report on the event.

The rally was organized by Owen Shroyer, the host of a show on Infowars, a media outlet based in Austin that is known to disseminate conspiracy theories. Shroyer has claimed that the coronavirus is a hoax perpetrated by the Chinese Communist Party and bashed reports of overwhelmed hospitals as propaganda.

Protesters against the stay-at-home orders got a boost of support Friday when President Trump appeared to back the demonstrations in Michigan, Minnesota and Virginia. The apparent endorsement from Trump contradicted his own policy of leaving the decision to roll back restrictions up to governors and advice from his own health officials, who have warned it is far too early to ease the orders.