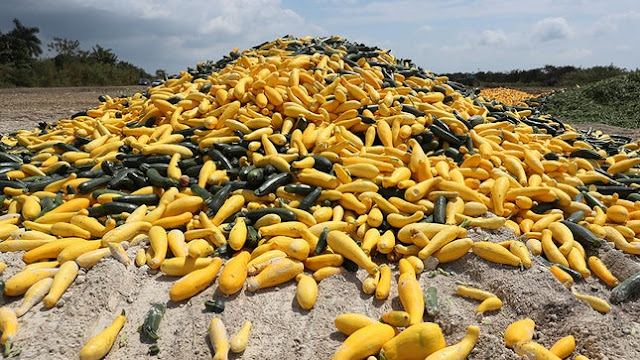 Fresh produce is increasingly going to waste as the coronavirus outbreak wreaks havoc on the nation's supply chains.

Farmers are finding it difficult to sell their products and distributors are struggling to redirect food quickly with restaurants, schools and offices closed. News reports in recent days have been rife with stories about farmers leaving produce to rot in the fields, even as Americans see empty shelves at grocery stores and food banks say they are overwhelmed by requests for assistance.

Experts and industry groups say the changes brought on by the pandemic, which has shut down huge swathes of the economy and kept millions at home, can't easily be accommodated by the complex supply chain networks already in place.

The Produce Marketing Association, an industry trade group, estimates that about $5 billion of fresh fruits and vegetables have already been wasted.

“I think what it demonstrates is that the food supply chain that we have set up now, it’s not set up to pivot ... quickly to address this kind of shock to the system,” Brian Ronholm, director of food policy at Consumer Reports, said.

Produce Marketing Association CEO Cathy Burns said the wasted fruits and vegetables were planted months ago and that farmers are already starting to plan for the next harvest.

“There’s product literally wasting on the ground and then you have a whole population of people that are in dire need of nutritious foods," Burns said.

"We have hundreds of thousands of farmers sitting on product. Because they don’t have the financial means to ship and distribute it throughout the country, there is good, nutritious food going to waste while there are thousands of people going hungry,” she added.

Industry groups have been pressing the Trump administration for action.

The American Farm Bureau Federation, an industry trade group, and Feeding America, a nonprofit network of food banks, wrote to Agriculture Secretary Sonny Perdue last week about the increase in wasted produce and floated a voucher program to get those agricultural goods to food banks in need. Since the beginning of the coronavirus crisis, 98 percent of food banks reported an increase in demand for food assistance, according to Feeding America, with millions out of work.

The proposed program would cut out some middlemen in the supply chain so farms can more easily get their goods to food banks and know they will be paid.

“If we can get the funding to give farmers a fair price for their product, we can get it to food service distribution centers—they need the middle people in between—get it to their facilities, repack it in boxes, deliver it to a school or a food bank for distribution,” Burns said.

Other agriculture groups are calling for the Agriculture Department (USDA) to step in and purchase products to keep them from going to waste and to provide payments to producers — measures included in the $2 trillion coronavirus relief package. According to The New York Times, the stimulus included more than $23 billion for farmers and gave Perdue control over how those funds are spent.

Perdue has said the USDA is working to develop a program to buy agricultural products from farmers and ranchers and fix holes in the supply chain to consumers. He has also stressed that the nation’s food supply chain is safe amid questions about safety.

“We’ll take dairy products. We’ll take meat, protein products, both beef and pork ... their produce as well. Many of this food that’s being — that does not have a home in a market for it, USDA will have a program that will procure this food and distribute it to food banks and other nonprofit charities,” Perdue said in an interview with Fox Business on Thursday.

A USDA spokesperson said that details on the program are “forthcoming shortly.”

Experts say that consumers are still buying fresh fruits and vegetables, but the retail market can't keep up with the increased demand as more Americans cook meals at home. And with restaurants and other businesses drying up as buyers, farmers find it harder to sell their goods.

“It’s not that people aren’t interested in buying produce or consuming produce. We’ve got to get the surplus into the mouths of the people that need it most. And our system is breaking down right there,” Burns said.

Up to 40 percent of the food supply in the U.S. is wasted in an average year, according to USDA data. But the current breakdown in the system has startled even experts.

Marion Nestle, a professor of nutrition, food studies and public health at New York University, said she is shocked that fruits and vegetables are going to waste simply because restaurants and schools are not buying those goods.

“Newspapers are full of photos of miles of cars lined up [for food banks] ... and food banks running out of food," she said, urging federal action. "This happened during the Great Depression of the 1930s. That’s when the government stepped in and created the food assistance programs that we have to this day. ... This is a problem that government is supposed to fix. That’s what government is for.”

“In theory, it would be great if that food could shift to grocery stores. Grocery store shelves are bare, but there is this excess food,” said Caroline Passerrello, an instructor in the Pittsburgh University School of Health and Rehabilitation Sciences.

She said supply chains "have to shift to focus on the grocery store purchases because that’s where the majority of food is being purchased now."

Some experts said that consumers' purchasing habits are also changing because of panic buying. Consumers may also be buying items that last longer instead of perishables, like fresh fruits and vegetables, so they can avoid trips to the store.

“In judging by the shelves when I go to the stores, many of the items that I would normally recommend in these uncertain times are depleting. It is more difficult to find dried bean or high-shelf-life stable products. Frozen and canned fruits and vegetables are very inexpensive with long shelf lives,” Connie Weaver, distinguished professor at Purdue University’s Department of Nutrition Science.

Carli Liguori, a registered dietitian and visiting instructor in the University of Pittsburgh, said that perishables like fruits and vegetables are wasted even in normal times.

“People don’t use their food in time. I think that that certainly holds now as well. People maybe aren’t as equipped to be able to purchase fruits and vegetables in a timely manner ... and use it within a week,” she said. "Things that we see driving food waste normally is people not being able to get creative.”

There are also growing concerns about safety and if the coronavirus can be transmitted through foods. The Food and Drug Administration has said that the country's food supply is not a source of transmission for the virus.

But 61 percent of Americans said they are concerned about the safety and cleanliness of fresh produce during the coronavirus pandemic, according to a Produce Marketing Association survey of 500 shoppers released on April 1.

“U.S. consumers actually aren’t abandoning produce, so this demonstrates that they understand it is a significant part of the sector. But the sector has a natural flow, and fruits and vegetables no longer have a place to go. That’s where it’s become more challenging,” Burns explained.

Ronholm said the challenges posed by the outbreak highlight "just how complex the food supply chain is."

"I think folks will maybe gain more of an appreciation of what goes into putting food on shelves,” he added.