Oklahoma to allow some businesses to reopen Friday 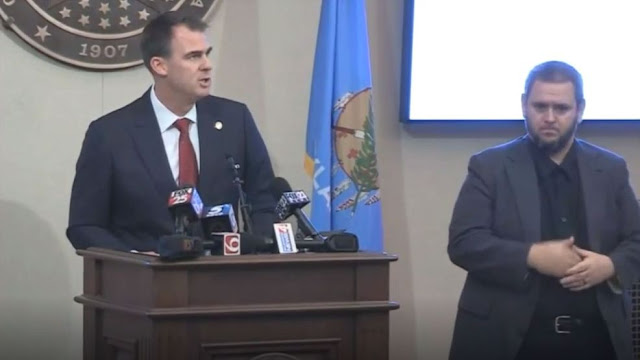 Oklahoma will allow some businesses to reopen starting Friday in a step toward bouying the economy, the governor announced Wednesday.

Gov. Kevin Stitt (R) said during a press conference that hair salons, barber shops, spas, nail salons and pet groomers can begin opening on Friday for appointments only in the first phase of reopening. The businesses are required to follow social distancing and sanitation guidelines released by the state’s Department of Commerce.

Other “nonessential” businesses will be permitted to reopen on May 1 as long as they follow the social distancing and sanitation guidelines. Through his three-phase plan, Stitt hopes to reopen the economy fully by mid-June, as long as there’s no surge in cases or hospitalizations.

The number of cases and hospitalizations have to stay “manageable” for 14 days in order to move to the next phase.

“This statewide approach is based on the data from our public health experts, is intended to mitigate risk of a resurgence, and protects Oklahoma’s most vulnerable citizens from the threat of #COVID19,” he said in a tweet.

The governor formulated a task force to carry out his “Open Up and Recover Safely” plan.

Churches will be allowed to reopen on May 1 so long as they do not serve food or drinks, their in-house nurseries remain closed and every other pew is left open. Movie theaters, gyms, tattoo parlors and venues for sporting events will also reopen, with restrictions, and restaurants can allow people in their dining rooms.

Schools will remain closed and visits to nursing homes will not be allowed. Employers are instructed to create plans for returning and keep common spaces closed.

Stitt said those who are over age 65 or have underlying medical conditions should stay home as much as possible through the end of May. Residents are encouraged to continue social distancing and decrease “nonessential” travel.

Oklahoma City Mayor David Holt said all businesses in the city will stay closed through April 30 when the city’s shelter-in-place order ends, The Oklahoman reported.

Oklahoma State Medical Association President George Monks told The Oklahoman that Stitt’s proposed plan was “hasty at best” as he said the state has not seen the two-week downward trajectory in cases that the White House recommended before reopening.

The state on Tuesday had its largest single-day spike in cases since April 9 when 127 new cases were confirmed. In total, Oklahoma has documented 3,017 cases of coronavirus, leading to 179 deaths, according to the state’s health department.