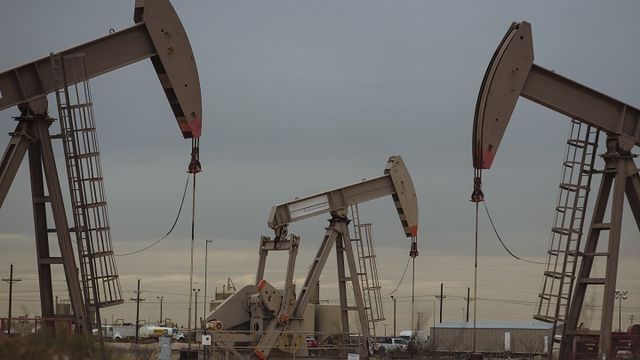 Oil hit $0.01 a barrel before falling to as low as -$40 and eventually settling at -$37.63, the lowest level recorded since the New York Mercantile Exchange began trading oil futures in 1983.

The low prices for West Texas Intermediate oil come as demand for oil has fallen 30 percent as people quarantine due to the coronavirus, leading to a massive surplus of unneeded oil and fuel.

Negative pricing reflects a willingness of oil producers to pay futures traders to deal with the excess oil.

“There is such a massive supply surplus and very little places to store it, and that's what’s driving this,” Jim Burkhard, vice president and head of oil markets at IHS Markit, said.

U.S. production is expected to drop by a little less than 5 percent for the rest of the year, according to market analysis by the U.S. Energy Information Administration.

But in the short term, those efforts haven’t been enough to combat the oversupply.

“Some companies want to wait out the market before shutting in production, so they’ll pay someone to take it,” Burkhard said, using a term for pausing production at wells.

Experts said Monday’s freefall was an oddity. Oil trading is centered on monthly contracts, a reflection of the time needed to get the product to market. Monday was the last day to purchase oil under a small volume of May contracts, with tomorrow’s bidding on June expected to raise prices.

But it’s a market rarity that could repeat itself in a month’s time if oil storage remains scarce. Rystad Energy estimates there may only be 21 million barrels' worth of free storage left.

And oil production has not yet gone low enough to make up for the lack of demand. Shutting in wells and later turning them back on can be expensive, and oil companies may not have the cash to do so. The process can also damage a well’s productivity, another reason producers may be willing to pay for others to take the oil.

“The potential for long term damage and the costs necessary to start up again are why producers say, ‘I might take a loss on oil right now because it's better than shutting in production and incurring those costs,” said Christopher Page, a market analyst with Rystad Energy.

Other efforts underway may also ease tension in the market in the coming months.

The Department of Energy is preparing to rent 23 million barrels of space within its Strategic Petroleum Reserve to oil companies — space they would pay for in oil.

The Trump administration has also floated the idea of paying oil companies for leaving their product in the ground as a way to ensure U.S. production falls after President Trump committed to limit production as part of a deal with other oil-producing countries.

But Burkhard said additional storage space will only help so much.

“It's not going to change the overall picture. It could help some companies that may need storage but it’s not going to conjure up demand growth, and demand collapse is the core problem,” he said.

A recent deal between oil producing countries to cut production also does not appear likely to help the U.S. The agreement, which dropped daily production by 10 percent, has mainly benefited Europe, which has more proximity to eastern markets.

“It’s done a much better job of balancing the crude market there than for North America,” Page said.