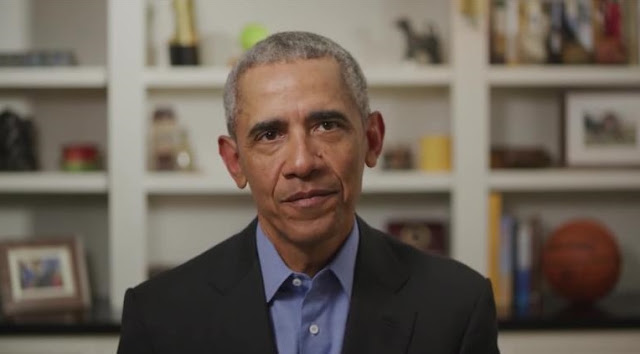 Former President Obama endorsed Joe Biden for president on Tuesday, giving the former vice president a powerful surrogate and fundraiser as he heads into the general election against President Trump.

In a video recorded from his home in Washington, D.C., Obama made the case that Biden represents the nation’s best hope of emerging from the coronavirus pandemic as a united and prosperous country.

“If there’s one thing we’ve learned as a country from moments of great crisis, it’s that the spirit of looking out for one another can’t be restricted to our homes or our work places or our neighborhoods or houses of worship, it also has to be reflected in our national government,” Obama said.

“The kind of leadership that’s guided by knowledge and experience, honesty and humility, empathy and grace. That kind of leadership doesn’t just belong in our state capitols and legislatures, it belongs in the White House, and that’s why I’m so proud to endorse Joe Biden for president of the United States.”

Obama praised Biden as someone who has endured personal tragedy, having lost a wife and two of his children. He said Biden has a personal and unique connection with middle class voters, pointing to how he led the administration’s Recovery Act efforts following the 2008 financial collapse.

“Joe has the character and the experience to guide us through one of our darkest times and heal us through a long recovery,” Obama said. “And I know he’ll surround himself with good people – experts, scientists, military officials who actually know how to run the government and care about doing a good job running the government, and know how to work with our allies, and who will always put the American people’s interests above their own.”

Obama did not mention Trump by name. However, he attacked Republicans for dismantling some of his signature achievements on health care and the environment. And he said the GOP had spent its time in power giving tax breaks to the wealthiest and “undermining the rule of law.”

Obama swiped at Trump, implying that he is dishonest and uninformed. However, he warned that defeating Trump in the general election would not be an easy task.

“The other side has a massive war chest,” Obama said. “The other side has a propaganda network with little regard for the truth. On the other hand, pandemics have a way of cutting through a lot of noise and spin to remind us what is real and what matters. It’s reminded us that good govt matters, that facts and science matter, that the rule of law matters, that having leaders that are informed and honest, and seek to bring people together, rather than drive them apart, those kinds of leaders matter.”

President Trump's reelection campaign and the Republican National Committee (RNC) said this week they had raised $212 million in the first quarter of 2020, a huge sum that leaves Trump's team with more than $240 million in cash on hand.

The Trump campaign fired back, arguing that Obama has been reluctant to embrace Biden and is only doing so now because Democrats have no other choice.

“Barack Obama spent much of the last five years urging Joe Biden not to run for president out of fear that he would embarrass himself,” said Trump campaign manager Brad Parscale. “Now that Biden is the only candidate left in the Democrat field, Obama has no other choice but to support him. Even Bernie Sanders beat him to it. Obama was right in the first place: Biden is a bad candidate who will embarrass himself and his party. President Trump will destroy him.”

Obama stayed on the sidelines during the competitive primary, which at one point featured 24 Democratic White House hopefuls, in an effort to not give the appearance that he was putting his thumb on the scale for any one candidate.

But Obama and Biden have a close friendship that has endured beyond their time in the White House together, and his endorsement is not a surprise.

The endorsement should give the former vice president a significant boost, as Obama and former First Lady Michelle Obama are two of the most popular figures in the Democratic Party.

The endorsement also comes a day after Sen. Bernie Sanders (I-Vt.) endorsed Biden for president, a sign that the party’s progressive wing will rally around the presumptive Democratic nominee in an effort to defeat Trump.

In his address, Obama praised Sanders at length, saying he’d been a relentless advocate for the poor and had energized young people, who Democrats will need to turn out to defeat Trump in November.

“Bernie is an American original, a man who has devoted his life to giving voice to people’s hopes, dreams and frustration,” Obama said. “He and I haven’t always agreed on everything, but we’ve  always shared the conviction that we have to make America a fairer, more just and equitable society.”

“The energy and enthusiasm he’s inspired, especially in young people, will be critical in moving America in a direction of progress and hope, because for the second time in 12 years, we’ll have the incredible task of rebuilding our economy, and to meet the moment the Democratic Party will have to be bold,” he added.

With support from Obama and Sanders, Biden now has the biggest names from the party’s establishment and progressive wings to advocate on his behalf.

In his own statement on Twitter, Biden said the backing of his former boss "means the world to Jill and me."

"We’re going to build on the progress we made together, and there’s no one I’d rather have standing by my side," Biden said.