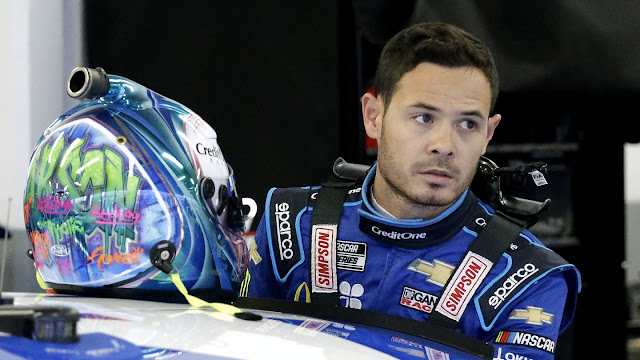 NASCAR driver Kyle Larson was apparently caught using a racial slur during a livestream of an online car race he was competing in on Sunday night.

Larson had joined several NASCAR stars and other simulation racers in an unofficial iRacing event organized by Landon Cassill on a virtual version of the historic oval track in Monza, Italy, which hasn’t been used for real racing in decades.

A pop-up on the screen indicated that Larson was the one speaking when someone could be heard saying “you can’t hear me? Hey, n----r.”

It’s not clear to whom Larson was directing the comment.

Larson is the son of a Japanese-American mother, whose parents were held in an internment camp in California during World War II. The Ganassi Racing driver is a graduate of NASCAR’s Drive for Diversity program, which aims to support the careers of up and coming minority and female drivers, and in 2016 became the first person of Japanese descent to win a NASCAR Cup race.

Ganassi Racing, Larson and sponsors Credit One and McDonald’s have not yet commented on the incident.

NASCAR issued a statement to Fox News Autos that said "NASCAR is aware of insensitive language used by a driver during an iRacing event on Sunday, and is currently gathering more information.”

Larson was seventh in the NASCAR Cup standings before the season was suspended due to the coronavirus pandemic, and is among many drivers who have been taking part in various events being organized on the iRacing simulation racing platform, including the official eNASCAR iRacing Pro Invitational Series.

During the April 5 Invitational Series race on Bristol Motor Speedway, NASCAR Cup driver Bubba Wallace “rage quit” after several accidents, saying on the live chat “that’s why I don’t take this s--t seriously,” and was later dropped by sponsor Blue-Emu.