Most newspapers not eligible for stimulus loans 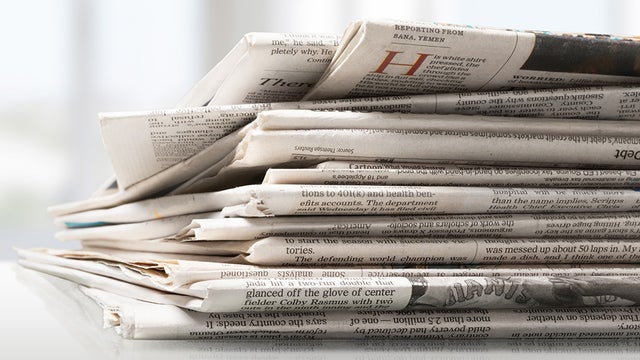 More than four out of five newspapers in the U.S. are not eligible for the government's Paycheck Protection Program, according to a Monday report in The Wall Street Journal citing data from the Alliance for Audited Media.

Newspapers in particular have been hit hard by falling advertising revenue as retail stories and other business are shuttered by the coronavirus pandemic.

The Paycheck Protection Program was created by Congress as part of a $2.2 trillion relief bill to try to help businesses get through the downturn

But some newspapers, because they are part of larger companies, do not qualify for the loans.

The Arkansas Democrat-Gazette, the WSJ reports, had to furlough or reduce pay for 10 percent of its 900 employees in April because the publication was not eligible for a PPP loan. WEHCO Media Inc., the parent company of the Arkansas paper, has more than 1,000 employees, pushing the paper beyond eligibility requirements for the program.

The Alliance for Audited Media says most newspapers are ineligible for the loans.

One company that did secure a PPP loan is the Seattle Times Co., which received $10 million last week, the Journal reported.

"Without [PPP loans], you are going to see a significant number of newspapers closing,” Seattle Times Co. President Alan Fisco told the WSJ.

Local and regional newspapers were already struggling, with more than one-quarter of mid-market to large U.S. newspapers experienced layoffs in 2018, according to Pew Research.

The Pew analysis found that 31 percent of all daily newspapers had layoffs in 2018.