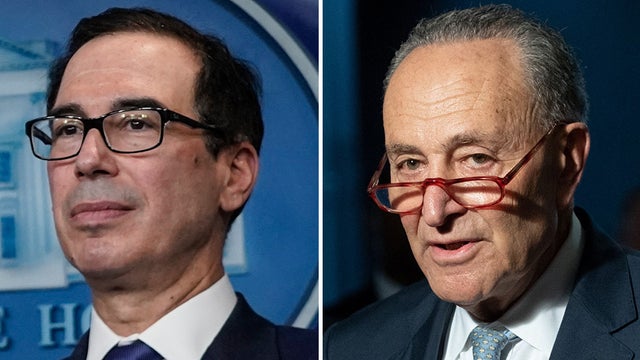 Treasury Secretary Steven Mnuchin and Senate Minority Leader Charles Schumer (D-N.Y.) are in talks to avoid a nasty Senate floor fight between Democrats and Republicans that could leave a critical small-business loan program short on funds.

Senate Majority Leader Mitch McConnell (R-Ky.) plans to ask for unanimous consent Thursday morning to approve an additional $250 billion for the popular Paycheck Protection Program, under which small businesses can get federally backed loans that will be forgiven if they keep workers on payroll during the coronavirus downturn.

But Senate Democrats are threatening to object unless the Trump administration and GOP lawmakers agree to several concessions.

Schumer and Speaker Nancy Pelosi (D-Calif.) say the package must ensure the money is getting to businesses owned by women, minorities and veterans in underserved communities.

They also say it should include another $100 billion for hospitals and health care centers, $150 billion for state and local governments, and a 15 percent funding increase for the Supplemental Nutrition Assistance Program (SNAP) that provides food stamps.

The Democratic leaders want these concessions attached to Mnuchin’s request for an additional $250 billion for the $350 billion small-business relief program Congress passed last month as part of the Coronavirus Aid, Relief and Economic Security Act.

If Democrats object to McConnell’s unanimous consent request, Republicans will undoubtedly bash Schumer and his colleagues for seeking to fulfill “preexisting partisan wish lists,” in the words of the Senate GOP leader, while holding up aid to businesses and workers.

A senior Senate Democratic aide said Republicans would be “opposed to funding for hospitals” if they refused Schumer’s offer.

Republicans, however, argue the Paycheck Protection Program, which faces a funding shortfall if Congress doesn’t act soon, was one of the most bipartisan elements of the $2.2 trillion coronavirus relief package President Trump signed into law March 27.

They say it doesn’t make sense to agree to significant Democratic concessions to shore up a program that quickly secured bipartisan support last month.

“There will be nothing that’s not controversial to add in. And so anytime you add something in you run the risk of further upsetting the apple cart,” said a Senate GOP aide.

The aide said the most likely resolution is that the Trump administration promises to address some of the Democratic complaints about small-business loans not making it to businesses owned by women and minorities in underserved communities such as urban and tribal areas.

“The program, despite the hiccups, is widely supported and everybody wants it to work,” the GOP aide noted. “Everybody knew, even during the negotiations, that there would be more needed.”

“It’s not necessarily a surprise that we’re back already,” the source added.

Republicans argue the Treasury Department and Federal Reserve are already making changes to the small-business lending program to expand access for businesses in underserved areas.

Senate Small Business Committee Chairman Marco Rubio (R-Fla.) tweeted on Wednesday that the Treasury Department has updated a “frequently asked questions” document to clarify the federal process of guaranteeing loans so that banks are more likely to participate fully.

“Bringing more lenders into the program and providing them clarity is critical,” said a Senate GOP aide who asserted that banks haven’t been denying loans to businesses in underserved communities; it’s just taken them some time to understand the process.

Republicans also argue that other changes sought by Democrats are unwarranted.

GOP aides say that the debate over how much money to send to state and local governments was litigated just last month during negotiations for the $2.2 trillion package.

Republicans say Democrats initially asked for hundreds of billions of dollars for the state stabilization fund. One person familiar with the negotiations said Schumer’s initial ask was for $750 billion.

A second Republican aide noted that much of the money for states isn't going to be distributed until later this month, noting the legislation from March provides 30 days for disbursement.

Similarly, Pelosi and House Democrats last month tried to get a bigger percentage increase in SNAP funding but fell short. Mnuchin and Schumer eventually settled on a $15 billion increase for the program.

Still, some Republicans are suggesting ways to improve the Paycheck Protection Program (PPP).

“Over the past several days, I have been in constant communication with banks, credit unions, and potential borrowers from Pennsylvania to receive direct feedback about the program’s performance,” Toomey wrote.

“As can be expected with the launch of a massive new program, Pennsylvania lenders have raised critical issues about the PPP,” he added.

He noted that SBA lenders have struggled to reactivate accounts and faced a variety of technical difficulties, such as waiting up to 48 hours for user names.

He also recommended relaxing limits on asset sizes for banks set by the Federal Reserve, which has limited institutions such as Wells Fargo from originating PPP loans for many applicants.

The Pennsylvania senator said lenders also need more clarity from the federal government on what documents, certifications and eligibility requirements they need in order to issue loans.