May Steve Dalkowski find the strike zone he missed in life 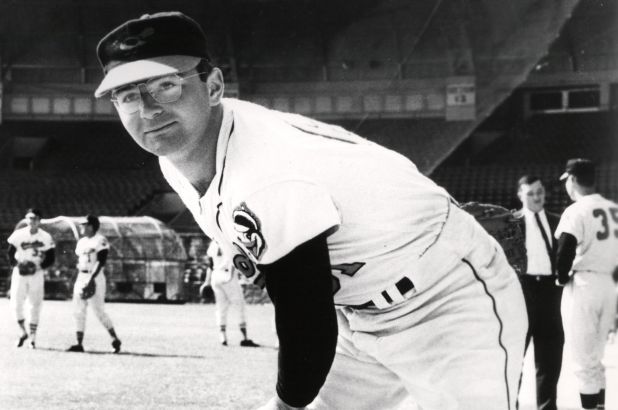 We throw around the term “legend” a lot in sports, usually just to mean an athlete whose accomplishments astound us. But Dalkowski, who pitched in the minor leagues for the Orioles in the late 1950s and early ’60s, was the real thing: Innumerable amazing stories were told about him, and we’ll never know how many of them were true. But he was such a larger-than-life figure, outsize talent and outsize flaws, that it’s not really possible to dismiss them. In an era of mass media, and a sport where everything is recorded and quantified, there is little room left for legend. Dalkowski was the last of his kind, hovering just off the horizon of verifiable fact, throwing otherworldly fastballs at the crossroads, the hounds of hell always at his heels.

Dalkowski never made the big leagues, never got his famous fastball clocked by a proper radar gun, never threw a pitch on film that survives. Joe Posnanski thinks he might, maybe, have been the only pitcher to reach 113 mph, the point at which a physicist says it might, maybe, be possible to throw a pitch with so much backspin that it actually rises. That would go a ways to explaining how many of Dalkowski’s pitches sailed high over the strike zone, batters, batting cages, any anything else in the vicinity of home plate. Did he really throw balls through fences? He might have, maybe.

Lefthanded, throwing triple digits as a teenager, Dalkowski had it all. He threw no-hitters the way other pitchers threw complete games. He made fools of big-league sluggers as easily as if they were high-school kids. Hopelessly wild, Coke-bottle glasses, alcoholic, struggling to focus mentally, burning his arm out at 27 after years of 200-pitch games full of multi-walk innings, Dalkowski had nothing. Only Earl Weaver, then a minor-league manager, ever understood how to rescue his diamond from the rough, cutting his walks per nine innings from 18 to six in a single year, mostly by simplifying what he was told and convincing him to hold something back. Like any tragic hero, he hurt his arm the next spring, just as he might, maybe have been ready to join an Orioles team that was turning the corner.

With nothing much in the way of skills or savings and a serious drinking problem, Dalkowski went from bad to worse after that. Baseball men told his legends on air and in print, while he faded into homelessness and addiction. Bull Durham gave his story a happier ending than the real Dalkowski ever found. He spent the last 26 years of his life in a nursing home, suffering alcoholic dementia, memory faded into legend. He found some peace there at last, and unexpected endurance. May he find the strike zone he missed in life.