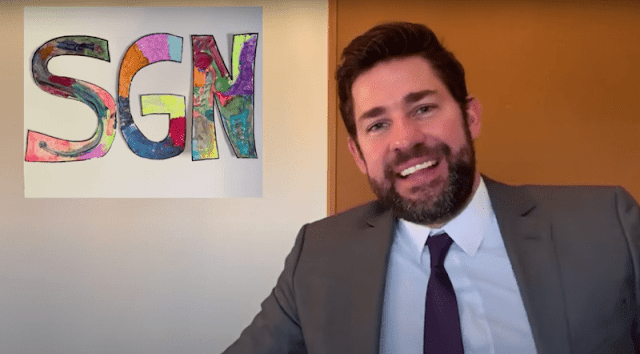 As the coronavirus outbreak has swept across the U.S., relatively little about daily life has been predictable, much to our chagrin. One notable exception has been the consistent outpouring of video updates from our nation’s horde of celebrities, who have conscripted their social-media followers into playing captive audience to diatribes about the importance of staying home, occasionally set to a tune.

Thankfully, though, not every celebrity has used his fame to demand the rapt attention of viewers, even as the world is standing still. Many have donated to various causes offering relief to the suffering and should be commended for it. But one celebrity in particular deserves praise for using the power of technology not to bring attention to himself but to bring joy and humor to those following along.

A few weeks ago, actor and director John Krasinski created a YouTube show called “Some Good News,” featuring a weekly episode, about 20 minutes long, in which he recounts uplifting stories from around the world and hosts special guests.

Krasinski began the show in late March after asking his Twitter followers to send him feel-good stories and things that made them smile. “For years now I’ve been wondering, why is there not a news show dedicated entirely to good news?” he said in his opening. “Well, desperately seeking my fix somewhere else, I reached to all of you this week, asking — nay, begging — for some good news. And boy, did you deliver. . . . I thought, ‘Enough is enough, world. Why not us? Why not now?’”

And so “Some Good News” was born.

“We’re all going through an incredibly trying time, but through all the anxiety, through all the confusion, all the isolation, and all the ‘Tiger King,’ somehow the human spirit found a way to break through and blow us all away,” Krasinski said in the show’s first episode, before showing the applause in cities around the world for health-care workers and telling the story of a girl who recently recovered from cancer and returned home to the applause of her neighbors.

In the same installment, Krasinski hosted his costar from The Office, Steve Carell, to mark the sitcom’s 15th anniversary and discuss some of their favorite moments from the beloved show.

Last week, Krasinski DJ’d “Prom 2020” for high-school students who missed out on their prom this year after classes were cancelled, hosting several artists to play music and closing by talking with another costar from The Office, Rainn Wilson. In his most recent episode, “SGN Potluck,” he hosted celebrity chefs Guy Fieri and Martha Stewart, among others, to show viewers how to craft some of their favorite recipes at home.

Perhaps best of all, Krasinski’s new episodes come out every Sunday evening, just as most of us prepare to face another long week shut indoors reading frightening news, as we worry about the health and safety of our loved ones and our own economic security. He doesn’t try to offer solutions or lecture us about our habits or health. Instead, his show has brought a little lightheartedness and joy to millions of viewers, and I’d be glad to see it continue, even when this difficult time is finally behind us.