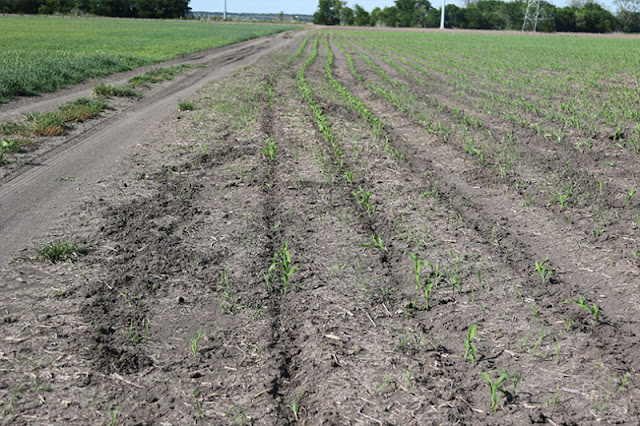 You spend months waiting for conditions to be right, days preparing the soil and hours planting, but it can all be gone in a matter of minutes with nothing left but the telltale sign of one of Texas’ most destructive animals—the wild pig.

With the wild pig population on the rise—by as much as three litters per year, per sow—the threats to fields, pastures and livestock is also increasing.

“Farmers have got it rough. We see hundreds of millions of dollars of damage a year just from pigs in Texas on crops,” Tomecek told the Texas Farm Bureau Radio Network.

Farmers will plant during the day, and by the next morning, the freshly-planted seed is gone.

“Many people have either gotten out of raising certain crops or they’ve gotten out of the farming business altogether just because of pigs, so that’s something that we think about an awful lot,” Tomecek said.

Even treated seeds are no match for hungry wild pigs.

“The labels tell us to be careful handling it, wear proper PPE (personal protective equipment), and yet the pigs eat this stuff and just keep marching on,” Tomecek said. “It’s an incredible problem.”

“If you’re a livestock raiser, you work hard to keep your stock out of the creek. Pigs get in there and damage the vegetation and the creek sides. It increases sediment and runoff, and ultimately will degrade that watershed because pigs are in there,” Tomecek said.

The invasive species is opportunistic and pose a threat to livestock and wildlife.

“They will kill and eat anything they can get ahold of,” Tomecek said. “They’ll eat our native wildlife, but then they also just compete for food resources and habitat pretty hard. If you’re a livestock raiser, there’s a number of diseases that these pigs can transmit to your livestock.”

They’ll prey on livestock, especially lambs and kids, because they’re small enough for most wild pigs to handle.

Some landowners have resorted to using fencing designed to keep wild pigs out.

Others have tried trapping or hunting to control the invasive species.

“We talk a whole lot about trapping and its various forms, and we always recommend using a large corral style trap—whether that’s remotely triggered or just a traditional head gate with some panel and t-posts,” Tomecek said. “There’s a million different designs, but that typically is the way we recommend because you catch the entire sounder, that group of pigs, all at once.”

If a landowner doesn’t catch all of the sounder at once, it leaves behind the pigs who know what traps are and will know how to avoid them in the future.

“Aside from trapping, you can ground shoot or ground hunt or run dogs, hunt with dogs. Those are low-harvest methods, but they are effective at putting pressure on pigs, so those pigs will avoid an area for a little while because you’ve put some pressure on them,” Tomecek said. “They do eventually come back. We’ve seen that in GPS collar studies of pigs, but it takes them awhile.”

You can also hunt the invasive species from a helicopter.

“This has been very effective in some areas, especially where there’s more open ground because you can get several landowners together to sign up to allow a helicopter—whether federal or state like our Wildlife Services agency or private operator—to chase and hunt those pigs where they are instead of the pigs slipping under a fence and getting away,” Tomecek said.

There are currently no toxicant options available in Texas, but research is underway.

The key, Tomecek said, is not to give up once you employ a method to control invasive wild pigs on your property.

“Everybody’s busy, and we know that, but you’ve got to keep after it. Even when you think you’ve gotten all the pigs, I promise you there are still some there, and we need to keep that pressure on if we’re ever going to make a difference,” Tomecek said.