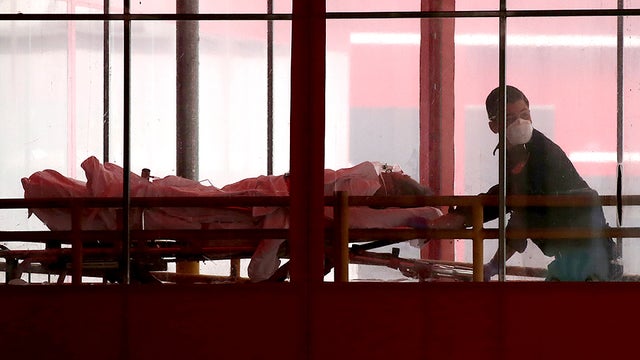 Hospitals across the country reported serious shortages of tests and protective equipment in the fight against coronavirus and concerns about being able to keep health workers safe, according to a new Inspector General report.

The report from the Department of Health and Human Services Inspector General released Monday found “severe” shortages of tests for hospitals to use and “widespread” shortfalls of protective equipment, known as PPE, to keep health workers safe.

“Hospitals reported that widespread shortages of PPE put staff and patients at risk,” stated the report conducted March 23-27. It consisted of interviews with administrators from 323 randomly selected hospitals across the country.

Hospitals said they are turning in some cases to construction masks or homemade masks, which they worried put staff at risk.

Supplies from government stockpiles did not always help. One hospital reported receiving 2,300 crucial N95 masks from a state stockpile, only to find they were not useable because the elastic bands had rotted. Another hospital said its last two shipments from a federal agency contained protective equipment that had expired in 2010.

One hospital said it is accepting homemade cloth gowns from a quilter’s guild to try to address supply problems.

"The level of anxiety among staff is like nothing I’ve ever seen,” one hospital administrator said.

The Trump administration has been under pressure to take a larger role in directing and coordinating the acquisition of needed supplies, as President Trump has repeatedly said he wants states to take the lead.

As also noted by governors, hospitals told the inspector general they are seeing disarray and rising prices because of a wide array of entities all competing for the same supplies.

“Hospitals often stated that they were in competition with other providers for limited supplies, and that government intervention and coordination could help reconcile this problem at the national level to provide equitable distribution of supplies throughout the country,” the report found.

A lack of tests also posed a serious problem, the report found, which also exacerbated the equipment shortages. Test results often took seven days or longer to come back, which combined with the lack of tests in the first place meant that hospitals had to use up bed space and protective equipment caring for patients while awaiting their test results.

“Hospitals reported that severe shortages of testing supplies and extended waits for test results limited hospitals’ ability to monitor the health of patients and staff,” the Inspector General found.

Some post-acute care facilities also required a patient to have a negative test result before they would accept the patient out of the hospital.

Hospitals also reported that they are at times receiving conflicting guidance from state and federal authorities.

As states scramble for more ventilators, the life-saving machines needed to help seriously ill patients breathe, no hospital reported limiting ventilator use yet. But they anticipated thorny ethical problems down the road.

“Hospitals anticipated that ventilator shortages would pose difficult decisions about ethical allocation and liability, although at the time of our survey no hospital reported limiting ventilator use,” the Inspector General found.