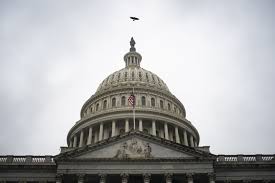 The House is preparing to vote as soon as Wednesday on a new coronavirus aid package as the White House and congressional negotiators near an agreement.

House Majority Leader Steny Hoyer (D-Md.) said in a notice to members on Sunday that, pending an agreement, "the House could meet as early as Wednesday, April 22, 2020 at 10:00 a.m. to consider that legislation."

"Members are further advised that at this time, a recorded vote on the interim legislation is likely in the House this week. Members will be given sufficient notice about the exact timing of any votes and when they will need to return to Washington, DC," Hoyer added in the notice to members.

The scheduling update is the latest sign that leadership and the administration are near an agreement on the "interim" bill, with a deal expected to be announced as soon as Sunday.

"I think we’re very close to agreement," House Speaker Nancy Pelosi (D-Calif.) said during an interview on ABC's "This Week" that aired Sunday.

A senior Democratic aide said that Pelosi briefed House Democratic committee chairmen on Sunday and that there were still four or five "outstanding issues."

One Republican who was on a House GOP call on Sunday evening said they expect the total package to come between $400 billion and $500 billion, including $60billion for small banks, specifically above the $250 billion for a total of $310 billion for that in total, $25 billion for testing and "$60 billion for EIDL... hopefully," but noted the deal has not been finalized and could still change.

Treasury Secretary Steven Mnuchin told CNN's "State of the Union" that they were making "a lot of progress" toward a deal. President Trump said during a daily coronavirus task force press conference on Sunday that he had just spoken with Mnuchin and that "a lot of good negotiations" were happening.

"We're getting close to a deal," he told reporters. "I think you could have a nice answer tomorrow."

If negotiators are able to reach a deal by Monday morning, the Senate could try to pass it as soon as Monday at 2 p.m., when they will next be in session, but any one member could slow it down.

McConnell and Mnuchin told Republicans additional state and local government funding and a boost in food assistance funding, two demands from Democrats, will not be in any agreement, according to a senior GOP leadership aide.

Mnuchin also told Republicans that testing remained an open area and that he was working with McConnell and Sens. Lamar Alexander (R-Tenn.) and Roy Blunt (R-Mo.) to resolve those issues quickly so the package can pass the Senate as soon as possible, the aide added.

Hope for an agreement comes as congressional leaders have been stalemated over the scope of a deal.

McConnell tried to pass $250 billion for the Paycheck Protection Program, which provides loans and grants to businesses with fewer than 500 employees, but was blocked by Democrats. The GOP leader similarly blocked an attempt by Democrats to pass a larger bill that would have included an extra $100 billion for hospitals, $150 billion for state and local governments, and a boost in food assistance funding.

But there were signs of momentum late last week when Trump told Senate Republicans that he could support adding other items onto a bill providing for more small-business funds.

"I would hope, as he said on that call, that Democrats and Republicans can work together to find a solution here. And that may involve something in addition to just advancing the Paycheck Protection Plan, but that's the plan that's out of money," Blunt, a member of GOP leadership, told reporters on Thursday.

Asked if Trump specifically said on the conference call that he was open to additional funds not related to the small business funding, Blunt said, "Yes."

"Apparently the president is open to discussing another topic or two," he added.