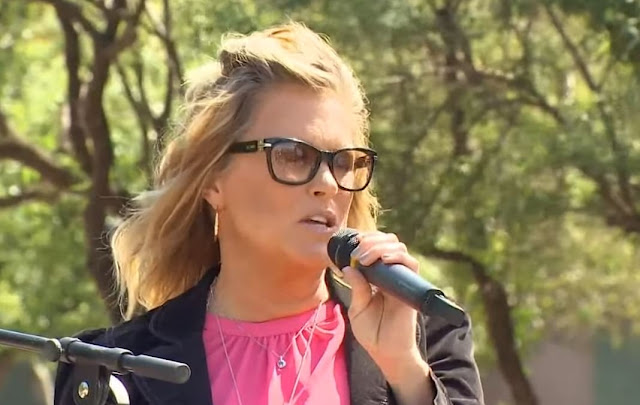 A salon owner in Texas tore to pieces a cease-and-desist letter she received from a Dallas County judge telling her to close her business after she reopened her shop in defiance of stay-at-home orders.

According to a local CBS station, Shelley Luther, the owner of Dallas-based Salon A la Mode, received the letter from Dallas County Judge Clay Jenkins on Friday. The move by Jenkins came after Luther had reopened her shop despite stay-at-home orders mandating nonessential businesses close temporarily during the coronavirus pandemic.

But that didn’t stop Luther from ripping the paper to pieces during a demonstration held near the Frisco City Hall over the weekend where protesters called for state officials to reopen nonessential businesses after weeks of closure during the pandemic.

“Our salon and other small businesses were closed down on Mar. 22, and we have not had any income since,” she said.

A local ABC station reported that Luther also received a citation for reopening her shop last week in defiance of stay-at-home orders. According to the station, violators can face up to a $2,000 fine.

At the demonstration on Saturday, where some participants did not practice social distancing guidelines issued by health experts advising people to stand at least 6 feet apart, others also spoke on the impact stay-at-home orders have been having on the country’s economy.

“I’m a realtor and my business has been hurt substantially. Everyone seems paralyzed,” a woman told the CBS station.

Texas Gov. Greg Abbott (R) is one of a long list of governors who have been facing pressure from some citizens to reopen nonessential businesses in their states as the country’s economy  slows amid the coronavirus pandemic, which has killed 54,000 people in the U.S. so far.

Earlier this month, activists and pastors filed a suit against the governor over the state’s stay-at-home order, claiming the mandate, which is set to end later this month, violates their constitutional rights.

“Once government and its constituents start operating on the basis of fear rather than facts, they are willing to take whatever medicine is prescribed, no matter how harmful the side effects may be,” the suit stated.

“Churches and small businesses are shut down, and Texans right to move about freely is restricted. For all practical purposes, the governor’s executive order constitutes a ‘lock-down,’” it read.

According to the latest data from the state’s health department, Texas has recorded over 24,600 cases of the virus, as well as more than 640 fatalities and an estimate of 10,763 recoveries from the virus.