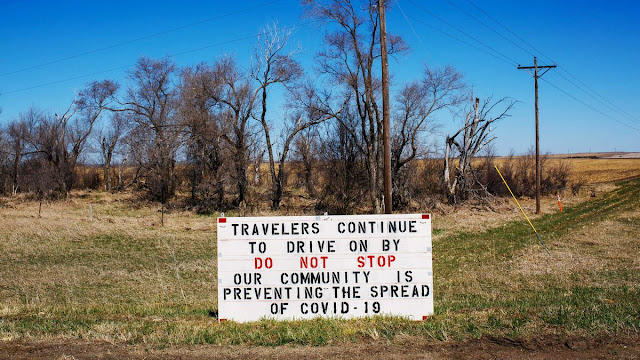 The coronavirus that has infected more than a million Americans is increasingly moving into rural areas in search of new victims, as nearly one-third of the nation’s counties experienced widespread transmission over the last week.

A new analysis by the Brookings Institute demographer William Frey shows the virus spreading to new areas in almost every state in the country. But its spread is now more concentrated in smaller towns, rural areas and exurban areas that had previously been untouched.

The coronavirus outbreak began as a largely urban phenomenon. A little more than 80 percent of the counties that were seeing a high prevalence of the virus by the end of March were urban cores, and only about 4 percent were composed mainly of small towns and rural areas.

But that ratio has changed as the virus has spread beyond city borders. In the last week, almost a third of the counties experiencing high prevalence for the first time are rural or smaller communities, while just a quarter are urban cores.

The people living in these counties are 62 percent white, a shift from the end of March when counties with high prevalence were 48 percent white.

Much of the growth in rural areas comes in places where people are forced into higher-density situations. Prisons and meat-packing plants have suffered outbreaks in recent days.

The United Food and Commercial Workers Union has said as many as 5,000 of its members working in the meat-packing industry have been hospitalized with COVID-19. More than 2 percent of all people incarcerated in the federal Bureau of Prisons system —  nearly 1,700 inmates — have tested positive for the virus.

Hotspots have emerged in places like Kansas, Michigan, Illinois and Indiana, while cases have increased in southern states like Virginia, Florida and Texas.

In Iowa, the virus first broke out in two epicenters, through a couple that had returned from a cruise in Egypt in an eastern county and in someone who had traveled from Europe through Chicago in a western county. Since then, the virus has marched through smaller counties where meat packing plants are substantial parts of local economies, said Christine Petersen, an epidemiologist at the University of Iowa.

Now Des Moines is becoming a hotspot, Neighborhoods in the southwestern corner of the city where migrant populations are likely to work in meat-packing plants are seeing growing numbers of cases.

“We're starting to see in these small Midwestern counties these bigger outbreaks happening, because they can't social distance and they are required to go to work,” Petersen said. “A lot of those packing plants are close to the interstate, because that's a good way to get material goods.”

In Virginia, the coronavirus has been present the longest in the Washington suburbs and in Richmond. It is now moving east toward the mountains; in the last week, Shenandoah, Frederick, Warren, Culpepper and Madison counties have all seen high prevalence of the virus.

“It was expected that you would see gradual increases in cases outside of urban areas as the pandemic progressed. This is partially due to the fact that more cases were introduced in urban areas early on in the U.S. epidemic and then the virus quickly spread there,” said Amira Roess, an epidemiologist at George Mason University's College of Health and Human Services. "Semi-urban and rural areas that are not as densely populated will have a lag in the amount of time it takes for viruses that are highly transmissible, like the COVID-19 virus, to spread."

By the end of March, more than four in five residents of high-prevalence counties lived in the Northeast. In the counties that have met high prevalence status in the last week, nearly half of all residents live in the South, and another quarter live in the Midwest.

The further spread of the virus into smaller communities also means it is beginning to affect more areas that President Trump won in 2016. Trump won more than two-thirds of the 901 counties that have reached high prevalence status since March 30.

Those Trump counties are most significantly concentrated in southern red states, though there are a substantial number in swing states like Michigan, Pennsylvania, Florida and Texas.

Epidemiologists worry that significant spread into rural areas will bring with it challenges that only the hardest-hit metropolitan areas faced. Those rural areas have older populations with higher instances of underlying conditions that lead to worse health outcomes for those who contract the coronavirus, and their health systems have less capacity to deal with a substantial surge.

Rural residents are also likely to suffer higher rates of poverty, and they are less likely to have health insurance or guaranteed access to quality care.

“The patterns you're seeing are socio-economic and because of health disparities,” Petersen said.