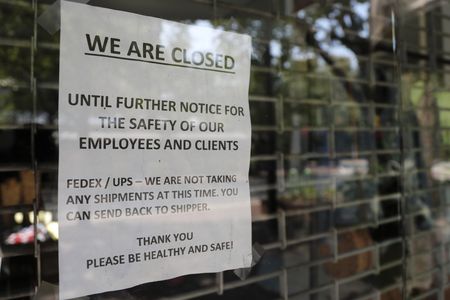 Another 5.2 million people filed initial unemployment claims for the week ending April 11, according to the Department of Labor, adding to the sharpest and most severe rise in joblessness in the nation's history.

Thursday's report is the fourth in a row showing more than a million initial claims, a level that had not been reached previously.

Overall, more than 22 million people have filed for initial benefits in the span of just four weeks, accounting for about one of every seven workers in the economy, and nearly wiping out the 22.4 million jobs created in the 11-year recovery that followed the last recession in 2009.

Economists believe that the unemployment rate is likely already up to at least 15 percent, a stunning rise from a 50-year low of 3.5 percent earlier this year. Some predict that number could end up reaching as high as the Depression-era peak of 20 percent.

Stock futures, which seem to have already priced in the ongoing economic disaster, remained stable upon the news, with trading even staying in somewhat positive territory.

The economy has tumbled into a tailspin as a result of the coronavirus pandemic and steps to combat it.

President Trump, who had based much of his 2020 White House reelection campaign on his strong economic numbers, has been eager to get the economy up and running again.

Republicans such as Texas Sen. Ted Cruz have become increasingly vocal in calls to get people back to work, arguing that the economic downturn has its own health consequences. Democrats and public health officials have argued that reopening the economy too soon would simply lead to renewed outbreaks.

In Pennsylvania, for example, the GOP-controlled Senate approved a bill that would partially lift the lockdown Democratic Gov. Tom Wolf has imposed.

The latest unemployment claims figure was below the peak 6.9 million reached two weeks ago and the similarly jaw-dropping 6.6 million filed the previous week, giving some hope that the most intense rate of job loss may be over.

While the seasonally adjusted figures are typically the best measure for unemployment claims, some economists have noted that the adjustment formula for making sense of the numbers may not be as useful during the crisis, which is producing unprecedented moves in the labor market.

The unadjusted data showed 4,971,823 claims for the week, a decline of about 20 percent from the previous week. By way of comparison, the comparable week last year had just 196,364 claims. The four-week total still tops 20 million.

But the figures don't account for applicants to expanded, emergency unemployment Congress approved last month, according to  Andrew Stettner, a senior fellow at The Century Foundation.

“The numbers today don’t include millions of unemployed gig or self-employed workers who have been promised aid by Congress. For the most part, these workers can’t even apply for help yet as states are still delayed in setting up the required applications," he said.

March's $2.2 trillion CARES emergency rescue law included provisions to both expand the scope of unemployment eligibility and add $600 a week to standard benefits.

But Rep. Don Beyer (D-Va.), the Vice Chairman of Congress's Joint Economic Committee, said the numbers would be even higher if state unemployment agencies, many of which rely on outdated technology and were not built to process staggering levels of claims, were able to process all the applications.

“These numbers would be even scarier if all of the Americans who have lost their jobs in recent weeks could actually file a claim," he said. In some states, he added, "it is easier to find toilet paper than it is to file for unemployment."

The Labor Department's official unemployment figures for April, which will include the data in the latest claims report, is not due until early May. It will also take into account new jobs created.

It could potentially contain some good news, as millions of businesses apply for the government's Payment Protection Program. The $349 billion program in the CARES act provides small businesses with forgivable loans to keep workers on the payroll.

The program, which is expected to run out of funds Thursday morning, has already approved 1,637,000 applications and allows for businesses to rehire workers that they laid off.

Congress has been wrangling over a plan to top up the program with $250 billion in additional funds. Republicans have pushed to pass a clean addition to the program, while Democrats want to add as much as $250 billion more in funding to states and hospitals, saying that the current program leaves out groups that don't typically have access to the banking sector.