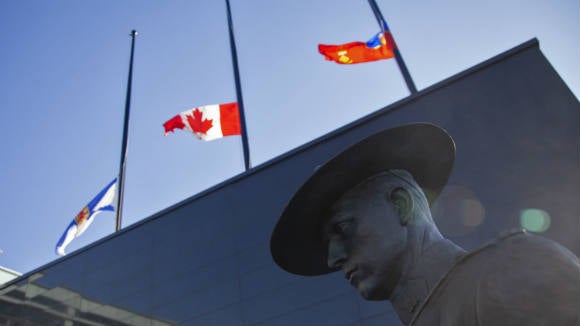 Sixteen people, including a police officer, were killed in the Canadian province of Nova Scotia after a gunman disguised as an officer shot people in their homes in the nation's deadliest mass shooting, authorities said Sunday.

Police said they believe the shooter may have targeted his first victims late Saturday but then began randomly attacking, according to AP.

Police had asked residents, already on lockdown due to the coronavirus, to stay inside their homes and lock their doors on Sunday amid the active shooter situation.

“Heidi answered the call of duty and lost her life while protecting those she served,” Bergerman said in a Facebook post.  “Earlier this afternoon, I met with Heidi’s family and there are no words to describe their pain. Two children have lost their mother and a husband his wife. Parents lost their daughter and countless others lost an incredible friend and colleague.”

“Heidi’s family is a part of our RCMP family and we will embrace and support them in the days, weeks and months ahead,” she added.

Another officer is in the hospital receiving treatment for non-life threatening injuries, Bergerman said.

Nova Scotia Premier Stephen McNeil urged residents to reach out to others if they’re feeling sad, angry or hopeless. He also said residents can call the provincial crisis line available 24/7.

“What happened here in our province is not who we are,” he said during a Sunday briefing. “It may change us a little, but it can not define us. We are strong, we are community minded, and we take care of each other.  So let’s do that now, let’s do that together.”