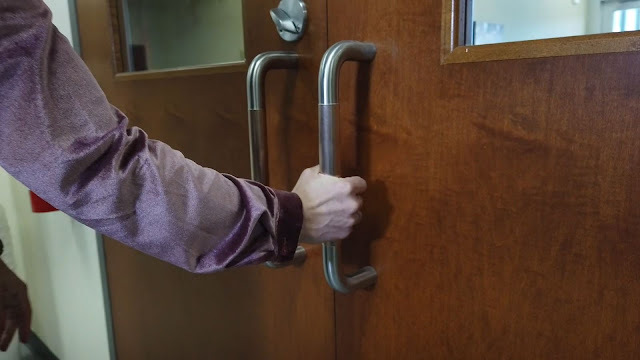 Biological warfare technology born at West Texas A&M University to protect soldiers from anthrax has been readapted and deployed across campus to protect door handles from viruses and bacteria.

Along with standard infection control practices, these stickers will help alleviate the microbial burden on these high-touch surfaces across campus.

“The stickers are made with a copper-alloy that has been proven to kill 99.9 of harmful pathogens, like MSRA, Staph. auerus and E. coli within two hours,” Hunt said. Soon, they will be tested against other pathogens, including COVID-19.

“Sometimes a complex problem requires a common sense solution,” said John Sharp, chancellor of the Texas A&M System. “Dr. Hunt and her team deserve a lot of credit for doing their part to address the biggest problem facing the world today.”

Copper is one of the oldest known antimicrobials. Applying it to high-touch surfaces was a challenge Hunt and her materials science engineering students first took on in 2016.

“We recognized way back then that there are many surfaces in the world that our hands share with others,” Hunt said. “These areas, which we call ‘high-touch,’ are very susceptible to picking up, harboring and transferring microorganisms among people.”

Hunt, a Canyon native, began her research into antimicrobial materials in 2009 when she was awarded a grant from the U.S. Department of Defense and the National Science Foundation to pursue her ideas to protect soldiers and civilians from biological weapons of mass destruction.

The Department of Defense adopted Hunt’s ideas for use in military gas masks. Then she and her team worked to convert the military technology into commercial and consumer applications.

Copper Clean stickers are made at an EPA-approved, American manufacturer, Hunt said. The first batch arrive just this week. West Texas A&M University will be the first customer, but Hunt said Buffalo Technology Group is already talking to school districts across the state who are interested.

“At a time when the whole world is more cognizant than they have ever been about the prevalence and danger of harmful microorganisms, my hope for these patches is that they are implemented in areas were large quantities of healthy, sick and immunocompromised individuals share high-touch surfaces,” Hunt said.

The stickers are for sale for $24.50 at here. Proceeds from their sales will go back into funding more research on campus.